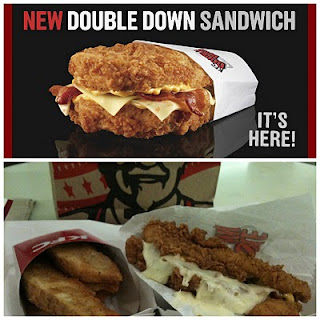 If cleanliness is godliness, then what is timeliness?  Beats the shit out of me, because I'm overdue in trying the Double Down.  A week late, but certainly not $7.54 short, which appears to be the going rate for heart disease.  That's for the meal, which comes with potato wedges and a soda.  The sandwich itself is $5.38, enough to make the "lady" who ordered behind me taunt the cashier with threats of "It better be good."  If it were any cheaper, I'd be asking myself more than "Why did I eat this?"  Of course, I do my best to eat first and ask questions later, but by the time I'm done eating, I'd rather take a nap, so most questions go out to pasture.  Regarding WhyDIET? however, the answer lies of course in my own stupid curiosity, but also some goading from the in-laws, one of whom even told me I had fans (note to the rest of you readers: tell me my fans want me to do it, and I may even take the milk bet (again)).  Initial reviews of "it's too greasy" and "it's too spicy" (biter Sam Sifton, Hamburger Calculus, and Mikey Il on Unbreaded) lowered my expectations so far that I was more scared than excited to try it, but the franken-wich that I unboxed was neither.  In fact, it was actually kind of dry.  The teaspoon of Colonel's sauce didn't help matters, nor did the one square inch of bacon that was blanketed by a congealed slice of processed American cheese product.  And much like the rest of KFC's menu, the impending headache grew more intense with each bite as the novelty was quickly replaced with depression.  This was no triumph.  I suppose it's like seeing the musical Cats, or so I've heard. 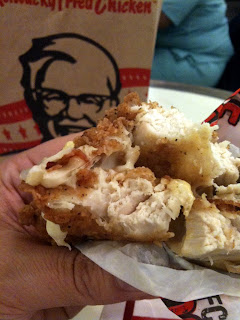 Slightly unhealthier than the sandwich was the venue I chose (for its proximity to my office), the food court in the Gallery mall in Philadelphia.  Even in the absence of flash mobs, there's no guarantee you won't get stabbed, which is a shame, because it's got an all-star cast of fast food, including a Golden Krust.  Wherever your local KFC might be (if you have a "local KFC," chances are you've eaten one of these per day since their inception), it wouldn't do all that much harm to try it, if for nothing else than to say you did.  You'll feel slightly dirty afterward, but that feeling fades, especially after a few gin & tonics.  Buen provecho.
Posted by Fidel Gastro at 12:16 AM