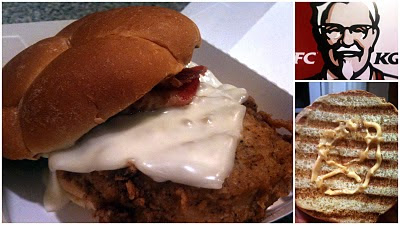 The Doublicious is to the Double Down what Signs (and according to most people, the rest of the M. Night follow-ups) was to the Sixth Sense, but way worse.  Heading home from a party where I ate more than my fair share of slow cooked pork, home grown tomatoes, and self-cubed pepper jack cheese, there was no reason to subject myself to this, but the perfect storm of a drive-thru and a soundly sleeping baby begged a sharp left turn into the KFC house on City Ave, where the intoxicating aroma of the colonel's cologne (two words that make English extremely difficult for non-native speakers) was the lipstick on an awful pig of a sandwich.  Actually, to call this sandwich a pig is insulting to the pig, so let's just call it a failure.  The marketing materials indicate that the "Doublicious" is named for its sweet and savory tastes, but the only taste I got was crap (singlicious? singlawful?).  It had to have spent some time under the heat lamp.  Both breast and (artificially grill-marked sweet Hawaiian bread) bun were chokeworthy, and it didn't help matters that the "colonel's sauce" was little more than a squirt.  Even the bacon grease couldn't bring it back to life.  The meal is five bucks, which isn't a bad deal, but for the same price, you're better off ordering a couple drumsticks and a side order of headache-inducing mashed potatoes and gravy.  Buen provecho.

For business school, I had my managers anonymously provide feedback about my leadership skills. One of the questions was:

"In order for this person to become a better leader, what would you like to see him do LESS of or stop doing altogether?"

These two answers were my favorites:

A: Pay attention to details so that client expectations are met.

A: Become more serious with his career goals

Thank you, managers, for (a) not paying attention to details yourself, and (b) telling me to follow a career path akin to Jeff Spicoli.  Buen Provecho.
Posted by Fidel Gastro at 2:28 PM No comments:

Email ThisBlogThis!Share to TwitterShare to FacebookShare to Pinterest
Labels: non-food, why me 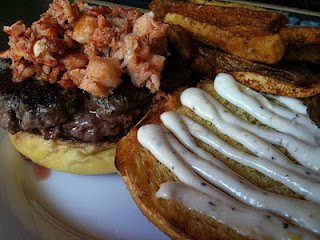 What better way to give the middle finger to the upper class than to take the epitome of opulence and put it on a bun?  Whether or not this was the intent, PYT's latest Burger of the Week does just that, adding a few ounces to their always-perfectly-cooked patty, then topping it with truffled lobster and a creamy aioli. What the fuck indeed.  It worked on more levels than there might be at the summer home of Juan D. Rockefeller,* but the overarching success was its balance.  The flavor was neither too beefy nor too lobstery, and the texture of the ground beef commingled with the texture of the lobster like old country club friends over one too many old fashioneds.  The chunks of lobster stayed with the sandwich due in large part to a tycoon-sized helping of fresh aioli, which I thought was a great strategy to handle any dreaded lobster leak-out.  The fries, whose portion was also tycoon-sized, spent too much time in the salt mines for my taste, but I was able to cut the saltiness with a can of 21st Amendment Hell or High Watermelon Wheat Beer.  At $14 for the burger, there are very few places where you can get more bang (and lobster) for the buck.  For all you early majority/late majority/laggard types that couldn't make it last week, you're in luck.  According to Tommy Up's twitter feed, it was so popular that he's keeping it on the menu, and since they're currently swimming in lobster, there's even the possibility of a lobster roll special.  Now count how many times I said "lobster" in this post and take a drink for each one.  Lobster.  Buen provecho.

*John D. Rockefeller's Mexican non-union equivalent, also a captain of industry.
Posted by Fidel Gastro at 12:07 AM No comments: 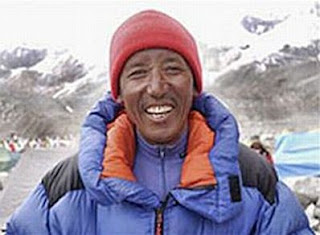 Check out the Top Chef recaps on foobooz, coming at you all season from yours truly.  This week, we learn that some of the cheftestants are doing what sherpas call "sauce making."  Use your imagination.  Buen provecho.

Top Chef Episode 5: Angelo Cheats on Tamesha with a Duck - foobooz
Posted by Fidel Gastro at 10:38 PM No comments:

My Friend's Friends are Cooler than Your Friends: Kirsten Henri 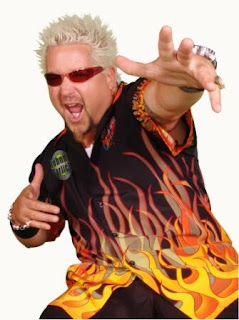 I'm definitely not as lucky as your typical toothless lottery winner, but I am rather fortunate when it comes to being in the right place at the right time.  In October of 2009, I shook hands with a dude named Jayson Tonkon, whom I would discover a few weeks later was in my fraternity after a string of "get outta' heres" and "no ways" led to the secret handshake (yes, I was in a fraternity; yes, I paid for my friends; and yes, there was a secret handshake. Commence judgment).  Since he lived a few doors down, we would start to bump into each other on the commuter rail, and as the "getting to know you" evolved, he mentioned casually that he was really good friends with Kirsten Henri, you know, the new food editor of Philly Mag?  I thoroughly enjoy being in the right place at the right time, and after a brief introduction, Kirsten agreed to meet for lunch to discuss roots, (w)riting, and rockstars. What follows is actually an email interview that was equal parts humbling and amusing.

FG: Firstly, congrats on your new gig at Philly Mag.  Great bunch of writers there.  How’s it going so far?

KH: It's going well. Print is so quaint and charming! We use paper and think about things for days at a time! It's fun.
FG: Now let’s ask some tough questions.  What’s the square root of 7?

KH: Please don't ask me math questions. It's painful for everyone involved.
FG: Speaking of roots, which one is your favorite? You can say ?uest Love if you want.  He’s everybody’s favorite root. 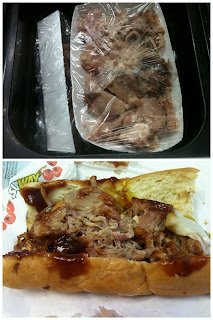 Ladies and gentlemen, we now have a proxy for the unicornwich that is the McRib. Subway is now slanging a pulled pork sandwich that--when toasted and taken for a swim in way too many squeezes of the BBQ sauce bottle--is about the closest you'll get to a McRib sandwich until someone figures out that whole time travel thing.  While there is no substitute for the subtle crunch of the McRib's "bones," the flavors are spot on.  I topped mine with american cheese, red onion, banana peppers, jalapeños, and mayonnaise. The footlong is eight bucks and I can no longer justify spending more than five there, but at that price point, the six inch is a much less depressing alternative when you consider the fact that you just ordered a pulled pork sandwich from Subway.  Buen provecho.
Posted by Fidel Gastro at 1:50 PM No comments: 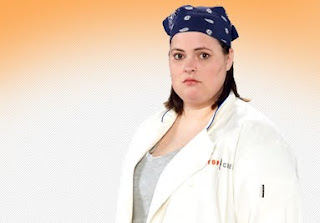 My (somewhat) incessant nagging and bleak outlook on life has yielded an opportunity to do Top Chef recaps for Foobooz (Thanks, Art). Please feign interest by making comments.  It keeps me that much further away from the operable window on the 34th floor.  Buen provecho.

An Irreverent Look at Top Chef

Posted by Fidel Gastro at 3:05 PM No comments: