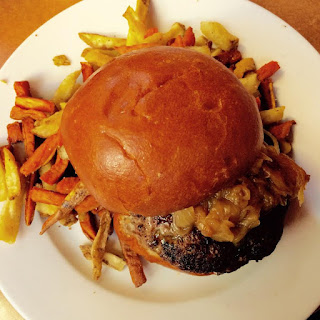 Less than two weeks later, and I happen upon another hair nestled between two types of tubers on this gorgeous plate of food. The saddest part? The burger and fries were so good that I considered, at length, ignoring the little strand of keratin and dead skin cells just so I could finish eating.

I swear I'm not doing this on purpose. I am gainfully employed and happy to pay for my meals. More importantly, I want to EAT MY FUCKING MEALS. Thankfully, I have the memory of a goldfish when it comes to things like this happening. And statistically, assuming I've eaten 3 meals per day for the past 36 years (less those 10 days I did the master cleanse which I won't count to keep things simple and they're really insignificant in the long run), thats:

I've found a hair* in my food less than five times, so by higher math:

Which means, despite the black swan of these past two weeks, there's a 0.01268% chance of finding a hair in my food (DF, can you check my math? Thanks). I'll take those odds any day of the week.

The real point here is that the restaurant handled things way better than Mel Crisco's Rubble Beagle Steakhouse. Not only was the burger taken off the bill, but the waiter also bought me a beer, which, in my opinion, is the proper way to handle a hairy situation. So to you, unnamed other restaurant that could probably be guessed just by looking at the picture and I apologize for that, I applaud your commitment to service, and thank you for restoring my faith in humanity. Buen provecho.

*That's not my own or someone I'm related to
Posted by Fidel Gastro at 10:19 AM 1 comment:

You Make the Call: Hair Garnish


I had a short and curly stowaway on my plate during a recent trip to an unnamed mega-steakhouse (rhymes with Mel Crisco's Rubble Beagle). I understand that accidents will happen (that's what they all heard Ricky say), and I'm not the type to make a big deal of such things (though I suppose writing about it does just that), but I was so surprised at the way the situation was handled that I wanted to see what you would do if you were the manager of Mel Crisco's Rubble Beagle Steakhouse.

I'm not sure if there's a section on porterhouse merkins in the Mel Crisco's Rubble Beagle Steakhouse corporate manual. Maybe it falls under the umbrella of crisis management, for there are people in the world who might do a lot more than whisper and point. If there are guidelines, then I suppose the manager is beholden to corporate policy. If there aren't, then personally, I wouldn't expect my $60 porterhouse to show up on the bill. Granted, apologies abounded and the entire table was comped dessert, which essentially evened the score from a dollars perspective (they also offered to replace the steak, but considering the hairy one showed up almost an hour after we were seated, I didn't want to screw up the pacing of the meal. And I was pretty full, having eaten over half the first one). Philosophically, however, I would have gladly paid for dessert and had the steak comped. I'm not asking for the entire meal to be free (full disclosure: I paid for everything with gift cards so it really didn't matter either way). This is more curiosity than anything else. Do you agree that the steak should be comped? Or was it enough to get a round of desserts?
Posted by Fidel Gastro at 2:55 PM No comments: