My Friends are Cooler Than Your Friends: Delicatessen's Michael Spector 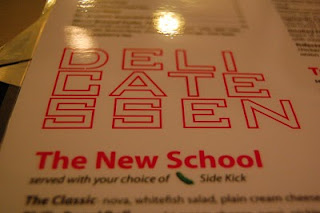 Michael Spector surveys his deli and sighs.  "My mother and grandmother used to bring me to places like this for Saturday lunches, usually after a bit of shopping."  This is something I know absolutely nothing about, but it's one of those memories that even a lobotomy couldn't erase.  So vivid, and so formative.  Granted, I didn't meet my first Jew until high school, so it's not like I would know about such things.  But it's a jump-off point, an homage to the old school with a progressive bent, call it Deli 2.0.  Being the diplomat he is, Spector's ultimate goal is to have a deli rooted in tradition that also offers something for everyone.  Judging by the extensive menu (thanks, Meal Ticket), he's off to a great start.  There are traditional offerings such as matzo ball soup and house-smoked pastrami, as well as offerings such as Bubby's Kitchen Sink Pho (rice noodles in matzo ball soup with assorted meats and whatever else is lying around in the kitchen) and a Tuxedo Dog (cheese-stuffed and bacon-wrapped Hebrew National).  Another goal of Spector's is to have fun, and to do so, Delicatessen is currently running a sandwich naming contest on their Facebook page.  Leave your idea on the fan page, and whoever gets the most comments will be able to eat their creation for free the entire month of May.  Next month, they are running a funniest Bar/Bat Mitzvah photo contest.  Clearly, nobody is taking themselves too seriously here (that's a good thing). 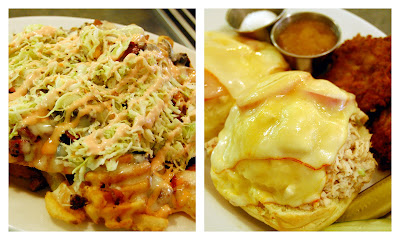 So how's the food?  I ordered "Mom Mom's Tuna Fish Salad Melt" and Pastrami Waffle Fries, more than enough for even the likes of me.  The tuna melt was served open-faced on challa bread, with muenster cheese and sliced tomato.  Latkes were served on the side, one of many items you can order as an accompaniment.  The tuna salad was excellently balanced.  It was neither gloppy nor dry, and there was enough celery to add a subtle crunch without overstepping its boundaries.  The latkes were thin and crisp, the grease held in suspension so you got the flavor without the sogginess.  The pastrami waffle fries--well, let's just say that I'm not too proud of how I handled myself after the first bite.  A decadent mess of potatoes, swiss cheese, russian dressing, cole slaw, and pastrami, I couldn't put my fork down.  The pastrami was peppery and chewy and meaty, and I know this may sound disgusting, but it was so good that I might not floss for a few days in the hopes that some of it sneaks out from in between my teeth.  Failing, that, I'll just have to return, and soon.  For drinks, Delicatessen offers micro-brewed sodas from Multi-Flow, a local brand of fizz sweetened with real cane sugar, the requisite Dr. Brown's sodas, and La Colombe coffee. 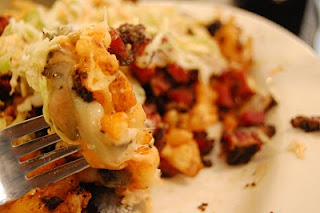 Spector still considers Delicatessen very much a work in progress.  Although he's been in the game for a number of years, this is his first role as proprietor. He says that right now, there is more that he doesn't know than what he does.  But he's an eager student, constantly looking for ways to improve product and service.  Personally, I think Delicatessen is off to a great start, and not just because I ate for free because we are old friends.  Being there during the lunch rush, I watched a cohesive kitchen and waitstaff expertly handle a full house, including a stroller brigade and an old lady with too much money and time on her hands.  My only recommendation besides getting there as soon as you can?  Go hungry.  Very hungry.  Buen provecho.