Squanto Ain't Got Shit On Me: Turkey Day 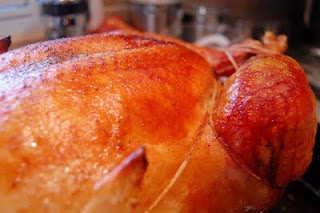 Holidays kick ass on many levels, but at the top of my list is always the copious amounts of food and spirits, and the way things have gone down in the households I've been a part of, consumption of said food and spirits usually transpires while wearing pants with an elastic waistband.  It puts the comfort in comfort food.  It also saves you from that whole cliche of eating too much and then having to undo buttons that really shouldn't be undone in public.  Even if your family says they don't mind, they're all re-thinking your place setting at next year's table.  Luckily for me, elastic pants or otherwise, my indispensable roles as both stuffing stud and turkey titan (wow, those are both horrible) have hopefully secured me an invite for many years to come, even if I decide to stop wearing pants altogether.

This year I opted for what I'm sure was everybody's alternative to Alton Brown's brining method (which has slayed in the past), the dry-brine (or cure, for all the hair-splitters on Chow.com).  The thought had popped into my head after reading an article by Drew Lazor over at Meal Ticket.  In fact, my man was even the first to respond on Twitter that this has been done before (in Vail, CO, likely sometime between skiing and skiing).  Salting the cumbersome holiday bird and letting it sit in the fridge seemed a lot easier than immersing it in gallons of vegetable stock in a cooler, then balancing it on top of whatever you can find in the garage so the bird will stay submerged for however many hours.  Turns out I wasn't the only one with the idea this year, and the NY Times was gracious enough to both lend me a recipe and make me look like I was jumping on some sort of bandwagon. 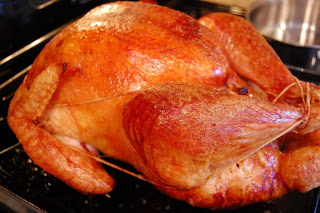 So last Saturday, I picked up my naturally raised bird from Fair Food Farmstand and gave it a nice rubdown with salt before throwing it in the fridge for four days (I got stuck with a nineteen lb bird so it needed some time).  I won't bore you with more details, but as you can see, it turned out beautifully, more likely because I got a little nutty with a stick of butter than any method of making the meat more succulent.  Underneath this golden brown dermis resided somewhat of a disappointment, however.  The meat was juicy and flavorful, but nowhere near what I had experienced when I used the same method on the chicken.  Compared to the wet brined turkeys of years past, I prefer this method, but at the end of the day, I didn't taste too much of a difference.  The real game changer was the bird's size.  I just don't like working with such a big bird.  I think next year's festivities will involve two small birds (and perhaps a deep fryer). 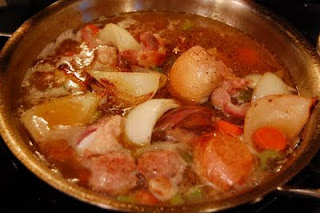 On the side should have been a delicious giblet gravy (just look at that stocky goodness), but I really shit the bed on that one.  I need to find some sort of sauce class, or at least get a fat separator.  My attempt at transforming the drippings into something magical and horrible for you ended in Mrs. Gastro saying, "Well, I can taste the grease and the booze from the wine, but that's about it." 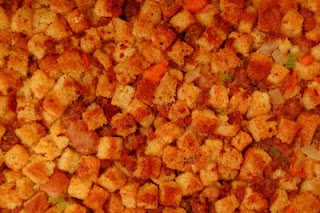 My other signature, a pound of sausage intermingled with processed cubes of cornbread and aromatics, came out a tad dry, but still gorgeous and about as Thanksgiving-y as you can get.  And on that note, here's hoping you and yours had a blessed and delicious holiday.  Buen provecho.
Posted by Fidel Gastro at 11:38 PM No comments: Links to this post 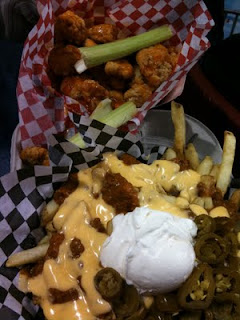 With all of the crap I've been eating lately, I may as well just change the name of the blog to "Why Did I Eat This?" or maybe, "How Am I Still Alive?"  I suppose there's the possibility of a spinoff, but nine times out of ten, spinoffs are depressingly unsuccessful (did anyone watch "Joey"?  If you did, please stop reading now because you're making my blog a lot less cooler than it should be).  Speaking of which, I was able to catch the Sixers vs. Jazz* game this past Friday, and in true fat ass fashion, I spent more time back and forth to the vendors than I did watching the Jazz crush the poor Sixers (actually, since there was literally nobody there, the food lines weren't that long, so I think I may have managed to see at least half of it). 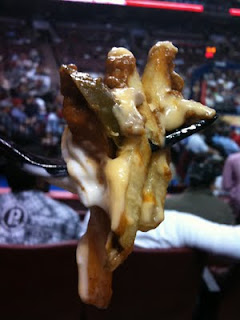 I really miss the days when basketball was cool.   Nowadays, the freakishly tall dudes just look bored running up and down the court.  It's kind of sad, but if nothing else, it gives me an excuse to eat arena food, and as written so eloquently in a previous post, it gets better as you get closer to the action.  The poor saps eating hot dogs way up high (even though they could have easily walked down) ain't got nothin' on two of my favorites: chili cheese fries and boneless buffalo wings.  As you can see above, the chips are replaced with french fries in these Irish nachos, and there's absolutely nothing wrong with that, especially when you have a fork to do your bidding.  I love the redundancy of cheese and sour cream.  It's like wearing belts and suspenders, or so I've heard. 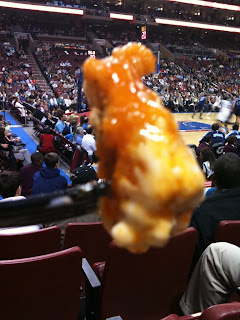 This last one's a little blurry, but it's still easy to see that this is a chunk of breaded and fried chicken slathered with a gut gouging combination of hot sauce and bleu cheese.  By the time we got to these, I think the beers had made their way to my dome piece, giving them the appearance that they were going out of style (get it? I ate them really fast).  The murderous pairing of all of this processed goodness with upwards of twelve beers racked up a major digestive debt that I was left to settle the next day, and although I enjoyed it at the time, I am once again left wondering why I ate this.  Buen provecho.

*Before you comment on how John Stockton was the cheapest player in the NBA, I already know, and I don't care.  As the all-time assist leader, his generosity with the rock cancels out any cheapness.  Eat it.
Posted by Fidel Gastro at 1:50 PM No comments: Links to this post 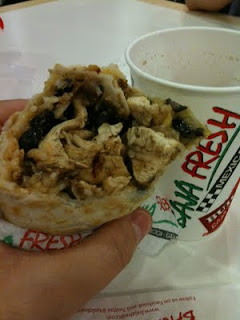 Maybe it's because I'm Mexican, but I find it very hard to fuck up beans, cheese, grilled chicken, and tortillas.  Not knowing whose concept Baja Fresh belongs to, I'll just assume that it's a bunch of white dudes in suits who say "tor-till-uh" instead of "tor-tee-yah," and then proceed to talk a bunch of shit on their inadequate burritos.  Here goes:

1. When your fresh salsa bar sits out from 11am to 9pm, I question exactly how "fresh" any of it can be at 8pm, hours after the acid in the tomato finally loses the battle to the acid in the lime, and the pico de gallo becomes a mealy mess of sodden produce. The mango salsa suffered a similar fate, and what remained resembled canned peaches in syrup (a bad thing).
2. Don't put the word "fresh" in your menu if you're going to serve the chicken with the artificial grill marks.
3. "Enchilado" is neither a word nor a style.
4. Since you're really not much higher up the food scale than Taco Bell, I strongly recommend not serving fish.
5. Tortillas should be gently warmed, not toasted to the point of crumbling at the slightest bit of pressure.

I imagine we'll eat here again because it's so close, but if you can avoid it, you should do so at all costs.  You're better off just buying a can of beans and a stack of tortillas from the grocery store.  Buen provecho.

Our local Baja Fresh is on Ridge Pike across the way from FWOT in the shopping center where there's an REI.  We wasted $18 on two burritos and two sodas.  The burritos came with chips, but they were soggy and salty and very upsetting to eat.
Posted by Fidel Gastro at 1:32 PM 1 comment: Links to this post

Email ThisBlogThis!Share to TwitterShare to FacebookShare to Pinterest
Labels: chain restaurants, cheap eats, fast food, Taco Bell, Why Did I Eat This 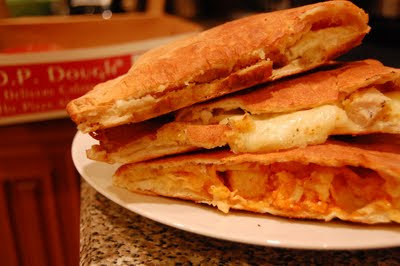 Read more »
Posted by Fidel Gastro at 12:23 AM 2 comments: Links to this post 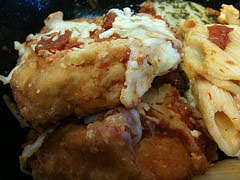 As the scale rapidly approaches Philadelphia's area code when I step on it (a very bad thing given my short stature), I can't help but wonder yet again why I'm eating a third and fourth installment of today's dining hall option, "chicken" parm. I am literally defenseless when it comes to breaded and fried chicken. You want to know how bad it is? Here are a few reasons why I am a pathetic lump of lipids:

1. It's 3:19pm. That means this has been sitting and sweating for over three hours, and it's a soggy mess.
2. The food service lady had some serious saran wrap skills, and I had to wrestle with her handiwork.
3. I'm eating this with my hands. In a classroom.
4. It's not even mine. It belongs to the guy next to me. Granted, he offered it to me, but common courtesy requires I say "no" instead of taking it before he actually put out the offer, thereby forcing him to offer it up out of guilt.

Feel free to pass judgement, because if I was reading this about someone else, I'd do the same. Buen provecho.

Posted by Fidel Gastro at 3:13 PM No comments: Links to this post

Email ThisBlogThis!Share to TwitterShare to FacebookShare to Pinterest
Labels: artery tartar, extreme sports, lunchtime, Why Did I Eat This

Give Me a Break

Sometimes I'll while away the days being remarkably unremarkable. Please take advantage of this brief service interruption to check out Hamburger Calculus' magnum opus on Kit Kat bars. It will send your brain into diabetic shock (that's a good thing). The grapefruit sports drink Kit Kat is the hands-down winner in the "would only try it on a bet" category. Buen provecho.