He Made How Much Last Year?

Here's some surprising and depressing news.  According to the Huffington Post, my least favorite person of all time besides the kids that fucked with me in grade school just cracked the top ten list of highest paid celebrity chefs. I'm sure he puts in the hours, but I just can't get past the Offspring haircut and the "terrible to the point where I want to start cutting myself" style.  He even beat Andrew Zimmern and Tony Bourdain.  If anyone needs me, I'll be spending the next few hours with my head in the oven.  During that time, please enjoy this infographic to see what Guy Fieri can buy for the eight million bucks he raked in last year.  Buen provecho.
Posted by Fidel Gastro at 3:42 PM No comments:

If I Won the Lottery 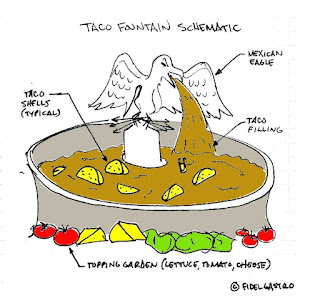 I don't play the lottery and I think it's a sucker's bet, but in a parallel universe where I'm a blatant hoarder living in a trailer with my collection of highly flammable stuffed animals, mainlining Easy Cheese into my face for every meal, I would spend at least 95% of my government subsidy on Powerball tickets and scratch-offs.  It would also be in this parallel universe that I would win the jackpot and be ushered into the world of the nouveau riche, where I would immediately commission the Taco Fountain pictured above and buy an El Camino. Buen provecho.

Full disclosure: The Taco Fountain was actually spawned in the brain of Jason Sheehan, food editor at Philly Mag and Foobooz, the latter of which sometimes publishes my drivel.  I've kind of been obsessed with the idea since he mentioned it, and you should be, too.  Further, if you consider yourself a Maker, perhaps we could get together and build it?  I'm sure it would kill at hipster weddings.
Posted by Fidel Gastro at 9:26 AM 1 comment:

The Easiest Paella Recipe Ever 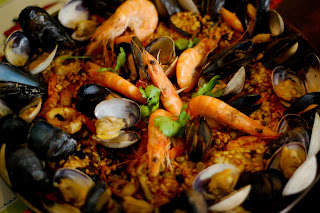 Until I realized that being Mexican is actually super awesome*, I would lie and say I was Spanish.  Not that being Spanish made you any less of an outsider in Utah, but bullfighting was definitely more acceptable than low riders (it's a footrace regarding which one is cooler).  I suppose it's not a total lie, but the details on my ancestry are foggy, and that commercial where the white people open up a laptop and have their entire family history after a few clicks is bullshit.  What does it all mean?  Nothing, really.  It's just a roundabout way to introduce you to the easiest paella recipe ever made.  Step-by-step photo instructions after the jump.