Wow.  What a deplorable showing in the blog post department this year.  I won't make excuses (twitter), but I will agree with Che Gruyere's father Jim that "Having two kids is like having three."  Better words have never been spoken.  Still, judging by my waistline and the fact that I currently fit into only two of the twelve pairs of pants in my closet, I must have eaten some pretty bad shit in 2011.  It's a shame that much of it went undocumented, but it makes it easy to put together a Top 10.  Better yet, here's a Top 5, because I barely made it past that number in total.  Buen provecho.

5. Manhattan Burger, Tokyo Airport McDonald's: This went undocumented on Fidel, but I did put a video on YouTube. Happy to be alive after a massive earthquake, I unhappily scarfed this sandwich down while the aftershocks continued to taunt my own insignificance.
4. BK Minis, Burger King: These sliders should be knocked out of the park, couldn't get past the catcher, or any other baseball analogy apropos for saying that we'd be happier without ever knowing they existed.
3. Big 'n' Toasty Breakfast Sandwich, Dunkin' Donuts: An annual offender, Dunkin' Donuts sold me on the idea of a fast food fried egg.  It was a lie bigger than the moon landing and the creation story combined.
2. Durian Chips: Almost missing its 2011 eligibility, it was a Christmas miracle that I could stomach this.  The dehydrated version of this foul fruit has all the fart-tastic qualities of the fresh version.
1. Ghost Pepper Steak, Jake's Sandwich Board: This was actually pretty good, but the ensuing havoc it wreaked on my insides was really really bad.
Posted by Fidel Gastro at 9:00 AM No comments:


Recently added to the sidebar is photographer Kyle Gibson at theruleofthirds.com. This one here is of professional beer judge/homebrewer/amateur soccer player/salon owner/beer program coordinator/dude that looks a bit like a young George Michael or maybe Rey Mysterio Jr. if you look real quick—and good buddy Jason McLaughlin.  Kyle also counts anthropology, music, and surviving a Ph.D's worth of time in Utah among his many talents.  Since you're probably doing less than I am at work right now (it's my lunch hour, what's your excuse?), why not take a moment to check out some more of his great photography and copy?
Posted by Fidel Gastro at 12:49 PM No comments:

Email ThisBlogThis!Share to TwitterShare to FacebookShare to Pinterest
Labels: My friends are cooler than your friends, Nebraska, non-food

Why Did I Eat This? Revisited: Durian Chips

Remember when I tried Southeast Asia's king of fruits alongside two comrades who squared off in a "Who Can Eat More Durian" challenge?  Well, those same two pals of mine went to Asia this past year and returned with a special Christmas gift for me: durian chips (I would have preferred a lump of coal).  Not being one to let food defeat me, I immediately opened the bag to try one, completely disregarding the fact that an entire pot luck of brunch items could resurface in the middle of my cousin's Christmas Eve party.  Check out the video above to see who wins between me and the durian.  Buen provecho.
Posted by Fidel Gastro at 2:48 PM No comments:

Email ThisBlogThis!Share to TwitterShare to FacebookShare to Pinterest
Labels: durian, extreme sports, macho bullshit, Why Did I Eat This, writer's block 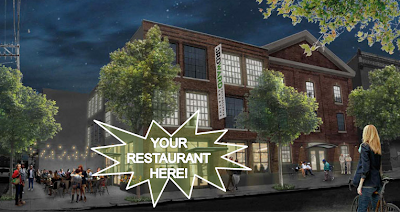 3rd Ward, a hub for all things creative, recently announced that they're headed down the turnpike to open a location here in Philly, and now they are looking to for somebody to keep their community of artists and makers fed. Because they walk the talk of community, they are conducting somewhat of an open casting call for the restaurant space. If you're vision aligns with theirs, I strongly urge you to check out the details in the RFP recently released on their website. There's an opportunity to get up to $80k in capital, and the process seems a lot easier than a month's worth of Quickfires and sleeping in bunk beds.  Plus, you get to work with a solid group of folks that will be a welcome addition to Philadelphia's already amazing artist community.
Posted by Fidel Gastro at 8:35 AM 1 comment:

This is Matt Basile, some random ass canuck who is using my name for some sandwich making enterprise that probably sucks butt.  I've currently been harassing him on twitter, but I'm tempted to make the 8-hour trip to Toronto to eat one of sandwiches, give it a horrible review, and then settle this thing one of the only two ways I know how: kumite or dance battle.

Don't get me wrong, a poutine and bacon sandwich sounds intriguing, but hasn't something like that been done before, like a year ago (RIP Adsum)?  Whatever. Good for him for following his dreams.  Bad for him for not doing better name research, and worse, being a biter.  Mr. Basile, I urge you to stop using my name, lest your dream turn into a nightmare.

P.S. I hope you get diarrhea.
Posted by Fidel Gastro at 3:11 PM No comments: