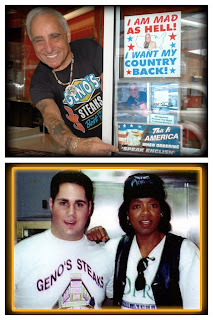 Foobooz reports that Joey Vento, founder of Geno's Steaks in South Philly, died last night of a massive heart attack at 71 years young.  Mr. Vento gained notoriety as a racist back in 2007 by demanding that his customers order in English.  All politics and -isms aside, however, I tip my jar of whiz to Mr. Vento. I hope the pearly gates are neon-clad and wide open for you.  Buen provecho.
Posted by Fidel Gastro at 9:26 AM No comments:

By now, you've probably seen the latest Burger King commercial advertising their version of the slider, the BK Mini.  If you haven't, it's basically a montage of people stealing other people's food, the food being a miniature hamburger or chicken sandwich.  Burger King's thought process was probably, "These things taste so good that you'll want to steal them."  Philosophically, however, it is proof once again that humans are dicks.  Alas, marketing makes me curious, and a rushed lunch the other day presented the perfect opportunity excuse for me to see whether or not these sliders were theft-worthy. 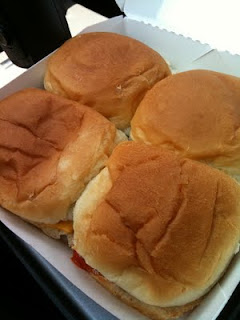 At $4.99, the value meal includes a 4-pack of the Minis.  I wanted two chicken and two beef, but you can't mix and match, so I opted for beef.  When I got the box, which was about the size of a McDonald's Big Breakfast container, I realized why.  The meat and buns are attached in fours and you need to rip them apart.  You could probably leave the whole thing intact, but then you would just be eating an enormous burger.  Not necessarily a bad thing, but when you're stuffed in the driver's seat of a parked car blasting both the AC and XM's Hair Nation channel, you don't really need the extra attention. 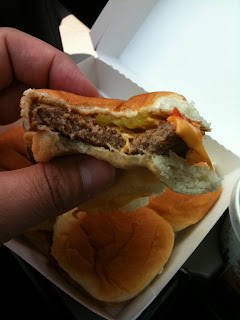 And how did they taste? Definitely not theft-worthy.  Without the extra shit that typically goes on a Whopper (the Minis are just ketchup, pickles, and cheese if you want it) you get the standard BK artificially flavored flame-broiled taste, but not much more.  I also caught a bad batch of fries, making the already crappy BK fries that much worse.  I'll probably go back for the chicken Minis, but in the meantime, I'll get my slider fix at White Castle.  Buen provecho.

Posted by Fidel Gastro at 10:37 AM No comments: