My Friends Are Cooler Than Your Friends: The Hill-Side 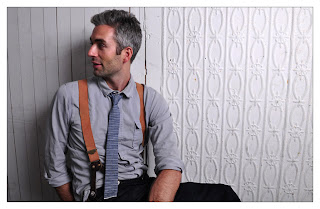 As my style continues its downward spiral into weinerdom, I can at least be proud of the fact that I know people like Emil Corsillo, whose quiet confidence and ancient soul gives him the ability to be both masculine and at the forefront of fashion. The combination of the two puts blue collar in the board room with The Hill-Side, a line of stylish alt-haberdashery that would make your father proud (but he wouldn't tell you because he's the strong, silent type).

Constructed of only the most rugged of fabrics (selvedge chambray, waxed canvas) and handmade in Brooklyn, these ties and kerchiefs will be with you from womb to tomb, and since the designs are all such timeless classics, you're looking good under any circumstance. You could even use one of their ties to hang yourself (I can no longer take the weight of the world, but my Hill-Side tie can take the weight of me), although suicide should be the last thing on your mind when you look this good. Buen provecho.

The Hill-Side's available in person at NYC stores The Smile, Smith+Butler, and Steven Alan. You can also fly to Wisconsin and purchase at Context Clothing in Madison. If you want to shop in your pajamas (or if you live nowhere near Madison or NYC), Context also has an online store. For wholesale, contact Emil Corsillo.
Posted by Fidel Gastro at 8:51 AM No comments: 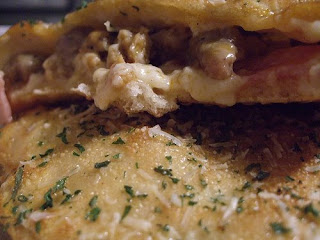 Admit it. This looks delicious. Maybe not gourmet, but definitely worth a trip down the esophagus. Gooey cheese, an assortment of meats, a crusty and chewy shell, all pre-processed, pre-packaged, frozen, shipped to your nearest Pizza Hut delivery storefront, reheated, and delivered to your doorstep. A second item from the Hut that makes me ponder, "Why did I eat this?" The main reason would have to be that I wanted to check it off the list of things that advertisements tell me to eat. I don't know how on earth they can make this thing so big for so cheap (see photo below for scale), especially with all the meat and cheese inside, but it beats the shit out of a $5 footlong. 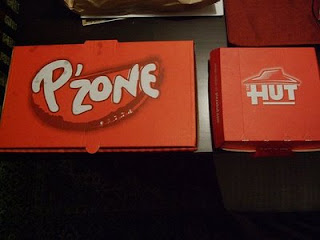 I've been trying to get my hands on one of these since Tommy Davidson came out of "retirement" to bounce around on TV and scream "P'zone!" in your face repeatedly (much better than the footlong jingle). Not being anywhere near a pizza hut at the time, I missed my oppotunity, and I figured P'zones had gone the way of the unicorn until my non-DVR TV watching presented me with a second chance. After Mrs. Gastro smacked me out of my Homeresque trance, I grabbed the phone, lowered my expectations, and impatiently waited for about 30-40 minutes. The verdict? It's actually pretty good, although it's way too much food. If it wasn't so heavy (according to the commercials, over a pound, which feels about right), you could wear it on your head to the Kentucky Derby. The best strategy is to try and stretch it over a couple meals/days if at all possible. Shoving the whole thing in your face will just put you to sleep. It's also really greasy, and I doubt you'd want to shove a paper towel inside of it, so that thing you normally do with really greasy pizza and paper towels doesn't work. If you're a slob like me, this isn't too much of an issue, but you should be mindful of such things as remote controls and couch cushions.

If we're going to call a spade a spade, it's really just a calzone with a clever name, but that's enough to sell me. If you can't find a real pizzeria nearby, or you're just a sucker for marketing like me, I'd give the P'zone a shot. Even if you think it sucks, you're only out six bucks. Buen provecho.

Posted by Fidel Gastro at 1:01 PM No comments:

As of late, I'm either too busy or too boring to maintain this damn blog, but at least I've been able to find the time to eat cheesesteaks (two in the "other" row since last time). The first of the two "other" steaks came from Fiesta Pizza in Chestnut Hill. It didn't suck at all. The movie we watched, "Rachel Getting Married," was a different story. I'd like those two hours back.

"Other" steak number two came by way of an increasingly rare late night run to Chubby's, one which might have been a little safer on foot (although the sub-compact rental car handled great in the Manayunk hills despite the BAC of the driver). Mushrooms (from a can) are starting to make their way into my steaks these days. The brine adds the appropriate amount of saltiness, and since they've been sitting in a can for Jeebus-knows-how-long, the fungus taste is muted (and then further muted by my heavy handed hot sauce/mayonnaise one-two punch) to a volume just above a whisper. That's all for now. Buen provecho.
Posted by Fidel Gastro at 1:05 PM No comments:

My Sister-in-Law Found a Dog. Is It Yours? 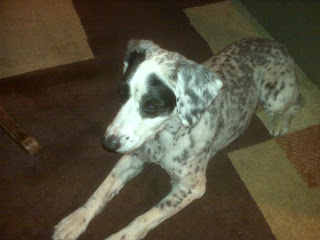 This little sweetheart was found on Dexter Street in Manayunk. If you are the owner or know the owner of this pooch, please leave me a comment so we can get her back home safely. Unlike my life, this is not a joke.
Posted by Fidel Gastro at 12:18 PM No comments: