Why Did I Eat This? Shanghai Edition

In Shanghai, the Colonel's face is literally everywhere. Peppered in between wet markets and high end retail stores, the unmistakable smell of fried chicken even cuts through the malodorous fog of the diesel fueling the country's endless growth spurt.  Typically, "Why Did I Eat This?" is a result of marketing, but I had a different reason this time around.  I read that Yum! Brands—the fast food behemoth whose weapons in the war against health also include Taco Bell and Pizza Hut—pushed into emerging markets by catering to local tastes, and I was curious to see how these local tastes were interpreted as fast food.  But I fucked up (typical).  Instead of seeing how the classically good KFC meal of a two-piece, mashed potatoes, and a biscuit stacked up to the American version, I wound up ordering the New Orleans Chicken sandwich, a non-breaded breast filet doused in not-very-hot sauce on a sesame seed bun (who orders non-fried chicken at a fried chicken joint?).  As expected, the sandwich was pretty terrible, although the amount of mayo they put on it kind of made up for things.  The videos give you the whole story (if you turn up the volume), plus an awkward interaction with a deaf Chinese panhandler, who, had he not been deaf, would have panhandled himself a faceful of high fructose corn syrup.  Buen provecho.

Posted by Fidel Gastro at 11:09 AM No comments: 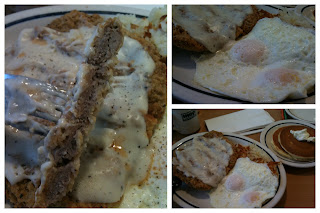 Where does a one-legged waitress work?  The same place that my fat ass can't resist ordering country-fried steak and eggs for breakfast: IHOP.  Lowlights of this disaster include:

- The grey leather of overcooked and low quality beef.
- The congealed chalkiness of country gravy subjected to an overdesigned air conditioning system.
- The watery and undercooked hash browns that weren't quite browned.
- The general taste of failure

Stick to the pancakes, but not the ones with all the shit on them, because those are crappy too.  Buen provecho.
Posted by Fidel Gastro at 2:32 PM No comments:

Email ThisBlogThis!Share to TwitterShare to FacebookShare to Pinterest
Labels: artery tartar, breakfast, chain restaurants, cheap eats, Why Did I Eat This, writer's block

I've given up on the idea of being famous when I grow up.  Instead, I have refocused my sights on retirement in Avalon, NJ, where Mrs. Gastro and I can enjoy Prime Rib Mondays followed by endless goblet-sized snifters of somewhere-between-well-and-top shelf whiskey on the rocks, all the while listening to the musical stylings of Jim Bannach, the piano man's piano man. Buen provecho.

Posted by Fidel Gastro at 4:37 PM No comments:

View more videos at: http://www.thefeast.com.
"Torture motherfucker" - The Wu-Tang Clan
Hoping to hallucinate a la Homer in what is now an ancient Simpsons episode (and one of the last ones before it started to suck), I stopped by Jake's Sandwich Board with The Feast to try their Ghost Pepper Steak, a cheesesteak topped with 20 drops of a sauce whose main component is 1 Million Scoville Pepper Extract.  I managed to get through most of it (I was three bites shy of finishing), but it was a pain unlike anything I've felt before, and it was even worse once it worked its way through me (gross).  If you like to push the spicy food envelope and/or you have something to prove, you should definitely give it a shot, but make sure you watch the video above to see what it will do to you.  Moving forward, I'll probably just stick to their goddamn delicious roast pork sandwich.  I've had all the discomfort I can take for the rest of 2011.  Buen provecho.
Posted by Fidel Gastro at 9:08 AM No comments: