Philadelphians, feel free to chase me out of town with torches and pitchforks in hand after saying this, but I am disappointed with Chickie's & Pete's.  Don't get me wrong, a Big Gulp-sized order of fries sprinkled with a sneezeable (yes sneezeable, not sizeable) amount of Old Bay seasoning and served with American cheese sauce just seconds away from congealing into an undippable globule is great when you're watching one of our local teams break your heart.  But remove that context (along with the gallons of light beer), replace it with one screaming infant and an anomaly of a toddler who prefers vegetables instead of chicken fingers and fries (how the hell did that happen?), and you're left with food that is crappy at best.  It may have been voted the "Best Sports Bar in North America" by ESPN, and I may still want to drive home drunk from there after a long Sunday of football watching, but since I'm supposed to be writing about food, here's a quick breakdown of the crap we ate last night:

1) Crab Fries: They're just too damn thin and flimsy, especially when the cheese sauce hardens.  Furthermore, it's kind of hard to eat them when you're holding a toddler.  My sincerest apologies to my son for the Old Bay fingerprints on the onesie.
2) Chickie's Cutlets: Standard frozen and boxed chicken fingers.  How they can get away with calling them "cutlets" is beyond me.
3) Signature Salad: Bagged romaine topped with Old Bay croutons and crab fries.  A real pile of shit.
4) Cheeseburger: Pre-formed patty, terrible burger-to-bun ratio, no toppings.
5) This last one's not about food.  I just thought I would mention that I was wearing sweats when this all went down.

You may be thinking, "Jackass, you're supposed to get the seafood when you're there," or you may have just stopped reading.  If you are still reading, it's obvious from the above list that much of the food at Chickie's & Pete's is pre-made and at the ready to get unsuspecting families like mine in and out the door and/or pump out food quickly to keep the drunks at bay.  Either way, not a great family or food destination, so save it for a night out with the boys, or leave the kids in the car.  Buen provecho.
Posted by Fidel Gastro at 9:00 AM No comments:

Email ThisBlogThis!Share to TwitterShare to FacebookShare to Pinterest
Labels: artery tartar, chain restaurants, deception, extreme sports, Restaurant Reviews, Why Did I Eat This

Federal Freakin' Donuts is Worth the Early Long Lunch 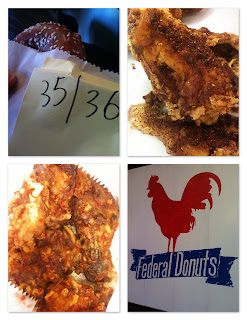 I'm late to the party, but it's nowhere near finished.  In its third week of being open, the birds at Federal Donuts continue to fly out the door.  I showed up at 11:50 A.M.—ten minutes before chicken service is supposed to start—and I was already order number 35 and 36.  When I walked in, a small crowd leisurely waited for their chicken, each of us holding our golden post-it notes.  The good part about the wait is that you can have a coffee and a donut for an appetizer; the bad part is that you run the risk of spoiling your appetite.  This actually isn't a worry for a fat ass like me, but it's something to think about if you're one of those people who actually listens to their stomach.

Starting with a nutella-tehina-pomegranate donut and an iced coffee, it was immediately evident why the closing time on their website is listed as "'til it's gone."  The sugary sponge studded with sesame seeds begins with the heart smart tartness of pomegranate and ends with the richness of the chocolate-hazelnut spread I stole from Pat Keller's pantry in high school because it was so good.  Still waiting and still calm (because you're guaranteed a couple orders of chicken), the POS crashed, and this is where things got slightly hairy.  I had intended on using a debit card for my orders of harissa and chile-garlic chicken, but without modern technology, I was fucked.  Thankfully—and keep this in mind if you wind up in the same situation—there was an ATM at the beer distributor on Washington Avenue, a few short blocks away.  Clocking what was probably the fastest 1/4 mile I've ever ran, I made it back, and before even taking a bite of the chicken, this is where the place went from good to great.  Because of the computer turmoil (they will one day turn on us, as evidenced by this mishap), the staff was extremely apologetic, comping my coffee and throwing a couple donuts into my takeout bag.  Even if I made it all the way back to my office and the chicken sucked, this kind of service would make it worth returning again and again.  But that's not how the rest of my day transpired.  It was a lot more like this:

Tooth-chippingly crispy (a very good thing), spicy, and cooked flawlessly, I can't wait to have it again.  Buen provecho.
Posted by Fidel Gastro at 9:00 AM 1 comment:

First the McRib and Now Top Chef? I Love This Time of Year

For those of you still reading this poorly maintained excuse for a blog, we have kicked off Top Chef Season 9 on on Foobooz, and you can find my Episode 1 recap here.  The best part about writing for an online publication?  You can say shit more times than Jesse Pinkman does on Breaking Bad.  Looking forward to another great season of Colicchio-induced tears and drunken Padma slurs.  I hope you are, too.  Buen provecho.
Posted by Fidel Gastro at 11:24 AM No comments: