The Best Shit I Ate All Year 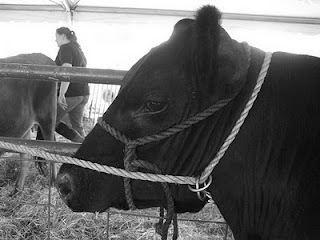 Disclaimer: I'm rushing this out, so if it sucks, I apologize.

It's been a big year for the Gastro family.  Following a move to Philadelphia (yes, Chestnut Hill is STILL Philadelphia), we managed to cram in a house purchase, a baby, and the beginning of business school.  Through it all, I've been fortunate enough to have the time and inspiration to eat, write, and inflate the spare tire that is my ever expanding midsection.  Without giving it much thought at all (assuming that there are few of you out there who give a rat's posterior), here are the best things I've shoveled into my face in 2009 (a worst list will follow shortly).

10. Nachos at Solaris Grill: The homemade chips and mountain of toppings are a bright spot in an otherwise dim menu at this Chestnut Hill jack of all trades.
9. Wings at Union Jacks: Full of townies (my favorite kind of place), the crispy/spicy/meaty balance of these wings more than makes up for the shitty service.
8. Chicken cutlet sandwich at Shank's: I can only infer from the photos and write-ups eating the wall space in the new Shank's that the old timey location was magical, but for me, having it within walking distance of my office is all the magic I need.  If you don't like broccoli rabe, you will after eating this sandwich.
7. Butcher & Singer burger special: For $5.95, it's worth the derision of a thousand vintage upselling waiters, not just the one that you get stuck with.
6. Veggie burger at Campbell's Place:  It's a samosa on a bun, and the bun is one of best you'll ever eat.
5. Short rib huarache at Distrito: Garces' year kicks the shit out of my year. I'm just happy that I was around to see it all go down.  Even if the Phillies shit the bed, we've always got Garces. The gooey cheese was the highlight of this pizza-esque dish, one option of many on the list of small plates (I also recommend the pork tacos).
4. Roast pork w/sharp provolone at DiNic's: There are few lines worth standing in.  This is one of them.
3. Short rib and cheddar fries at Village Whiskey: What can I say? The man knows his way around short ribs.  Served in a cast iron skillet and lightly scented with cinnamon, these will warm your soul, even on the coldest of days.
2. Strike Zone and D.P. Dunkers at D.P. Dough: Surprisingly, I preferred this vegetarian zone to any of the meat options I had.  I just supplemented it with a box of boneless and breaded bites of chicken.  Make sure you get a side of bangin' sauce.  You won't be disappointed.
1. Fat boy monster at PYT: The burger that I paid for (this one) was better than the burger I got for free. Go figure.  This burger makes you want to be morbidly obese just so you can have a second or third without making yourself sick.

Stay tuned for the worst.  Because I ate so many awful things, I'll need to think on that one a bit.  Buen provecho.
Posted by Fidel Gastro at 1:47 PM