A Legendary French Chef Walks Into a Bar... 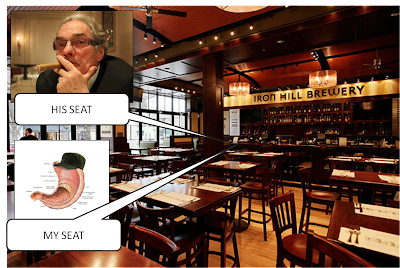 I exist on the periphery of tragedy.  Eleven years ago, I was five blocks away from the hole formerly known as the World Trade Center and now known as the Freedom Tower.  A year later, a giant portion of the northeast was enveloped in darkness, and I'm pretty sure my block was one of the first to get power.  Last March, I was in Tokyo during the biggest earthquake in Japan's history, and a few months later (this really wasn't a tragedy but it does fall into the category of holy-shit-that-was-intense), Mrs. Gastro missed her epidural window and had a drug-free childbirth (she was a total rockstar).  It has been quite the decade, but not even a former sommelier of Georges Perrier could prepare me for a chance meeting with him at Iron Hill Brewery last night.


My reward for a run to Babies 'R' Us was 12oz. of Iron (Chestnut) Hill's Lex Luthor, a freshly tapped 11% ABV Triple IPA.  There were two open seats between a blatantly obvious middle aged match.com date and a trio of nerds watching the spelling bee.  Not wanting to interrupt a second chance at happiness, I took the one next to the nerds.  Minutes later, a diminutive old man whose style and cologne reeked of Israeli jeweler and/or Italian expat sat next to me.  Nice suit, gaudy jewelry, short in stature but big in presence.  Mostly, however, just grumpy, like blue-collar dad grumpy.  I knew the face, but it didn't immediately register, because I never knew how little this big man was, so I texted my sommelier friend.

FG: Is Georges Perrier short? I think he's sitting next to me at Iron Hill.
JH: Short as shit.  He lives in Chestnut Hill...Probably him.

So I'm sitting next to the guy that basically spawned Philly's food scene, watching him berate the bartenders like they're his own, and what do I say?

FG: The burgers are pretty good.
GP: Eye had borgair for lonzsh.
FG: Mussels then?
GP: I do a bad day. Weez loyarz unteel now. I have cheeekin pod pie.

And we all wish it were as simple as me buying Monsieur Perrier a lager (which I did) and he quietly eats his chicken pot pie at the bar, pays his tab and goes home (which he totally didn't). He was nice to me, but the waitstaff was another story, and the poor guy completely self-destructed after receiving less than 3-bell service.  Lots of hand waving, French disgust (the worst kind because it makes you feel mime-sad), and then a final and deliberate "beetch" that got the manager involved, a gentleman who stood two Georges (Georgeses?) tall and who could have easily tossed him like he was playing cornhole at a tailgate.

So here I am once again, on the periphery of tragedy, this time a little closer to the epicenter.  I figured it would be a nice gesture to buy him a beer, but doing so prompts him to return the favor, and although I'm stoked to have Georges Perrier crying on my shoulder, I'm now in the middle of him and the waitstaff, none of whom have the slightest idea that this giant asshole also happens to be a fucking legend.  Not that it gives him any more latitude to act like a big baby, but perhaps if they knew who he was, maybe they would have been a bit snappier with the service?

As intense as it was, it was kind of sad.  The dude from the match.com date took a moment to thank him and also lie about drinking a fancy bottle of wine (Georges was pleased), but the spelling bee nerds next to me--all in their 20s--had no idea who he was and were disgusted at his behavior. They were like, "Who's the douchebag?" and I was like, "That's Georges Perrier," and they were like, "Who?"

I didn't stick around long enough to watch the tragicomedy play out, but I'm hopeful it ended well.  I was taught to respect my elders, even when they were being completely unreasonable.  I'm not sure the younger generation buys into this, but I doubt Iron Hill would want to be known as the restaurant that tossed Georges Perrier.

The end of an era indeed.
Posted by Fidel Gastro at 8:30 AM