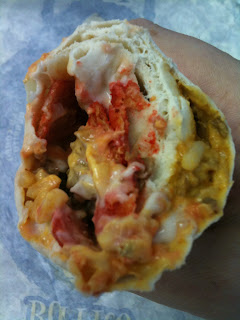 It should come as no surprise to the sue-happy consumer that Taco Bell's "Taco Meat Filling" contains less than 40% beef in its composition.  I understand the whole "truth in labeling" thing, but c'mon people, you're eating fast food.  You should already know that it is hyper-processed, pregnant with preservatives, and generally contains little to no "food" at all.  But who gives a shit?  It's cheap (and getting cheaper, even with commodity prices on the rise), fast, and convenient.  So what does my fat ass do with the news?  I immediately make a run for the border to try their latest offering (of course), a collaboration with Frito-Lay (that's a bit of a stretch) that is the textural masterpiece known as the Beefy Crunch Burrito.  Simply put, the sum of Flamin' Hot Fritos and their standard "beef" burrito is greater than the parts.  The sour cream eases the hot-for-hot's sake of the Fritos, and to repay the favor, they give the mushy little burrito some structural integrity.  Beef or no beef, these things are small enough and cheap enough that you may want to eat three or four, and I see nothing wrong with that.  Furthermore, for those of you in favor of this whole lawsuit, know this: if you fuck up Taco Bell for the rest of us, I will personally see to it that a laxative will somehow make its way into each and everyone of your meals until you meet your respective makers from a hopefully non-poop-related death (because I don't want you to think I'm making threats here, just promises of discomfort). Buen provecho.

Email ThisBlogThis!Share to TwitterShare to FacebookShare to Pinterest
Labels: cheap eats, extreme sports, fast food, gluttony, Taco Bell, Why Did I Eat This