Why Did I Eat This? KFC's Nashville Hot Chicken 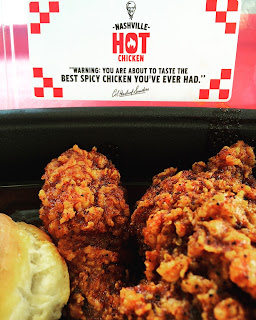 Nashville Hot Chicken is so hot right now. So hot, in fact, that Kentucky Fried Chicken has figured out a way to make the regional and legendary spicy fried bird available nationwide.

If you don't know the story behind hot chicken, Wikipedia is a great place to start. Basically, some scumbag dude's girlfriend wanted to exact revenge on him by dousing his chicken with cayenne pepper (and other secret spices). Unfortunately, the plan backfired when he liked the chicken so much that he developed a recipe for it and opened up a chicken shack of his own. Call it an unhappy accident.

Presently, Nashville touts a couple dozen places to get hot chicken, and plenty of chefs have brought it to their home states, including our local boy and Top Chef winner Kevin Sbraga. At his southern-inspired restaurant The Fat Ham, Sbraga's version is the result of many road trips and tireless research in the days leading up to its opening. And it's really fucking good. I would definitely consider him to be an expert on the subject matter, so it came as no surprise when I saw a picture of KFC's version pop up on his Instagram feed, followed by a lengthy review. His verdict? A failure in all categories. Bad breading, bad sauce, bad meat, bad seasoning. 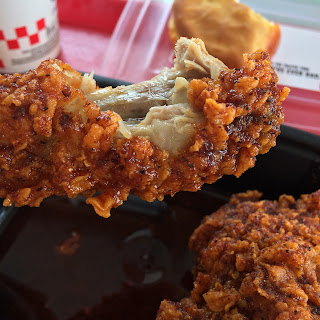 Of course, none of this would deter me from giving it a go eventually, and I took it as a sign (literally) when the colonel's shit-eating grin kept popping up on the blue service signs on a recent road trip to Maryland. I told myself after the fifth exit advertising a KFC that if there was one at the sixth exit, I'd pull off. Well, you can guess what happened. Here's my opinion of mass produced "Nashville" hot chicken, in a handy dandy list:

1. Kevin's right about the sauce being too much. I watched the lady behind the counter empty almost half the squeeze bottle into the tray of chicken. There was a wading pool of it left over when I was done.

2. The chicken was adequately crispy despite the sauce waterboarding, but that's to be expected because KFC is using their extra tasty crispy chicken. Left dry, you could cut someone with the shards of breading.

3. The meat was fine. I always ask for dark meat so it's typically juicy (fatty) no matter what. I'm not gonna pretend that this wasn't factory farmed and I'm basically eating the fruits of modern food science instead of an actual chicken.

4. Flavorwise, Kevin's right. The chicken isn't hot. At best, it's lukewarm. I suppose naming it "Nashville Lukewarm Chicken" would probably hurt sales, though. My palate for hot chicken is not as refined, so I couldn't pick out anything that was really off balance in the spice blend other than the full court press of sodium.

Kevin says he won't get it again, but I think I would. It could have been a lot spicier, but I didn't mind the overall experience. It certainly wasn't "The Best Spicy Chicken You've Ever Had" (as the warned by the sticker on the box), but it was passable. I was also happy that I didn't get a preservative headache from KFC like I normally do. I certainly wouldn't go out of your way to try it, but if you find yourself finger lickin' for whatever reason, it's probably the best thing on the menu right now. Buen provecho.
Posted by Fidel Gastro at 2:32 PM