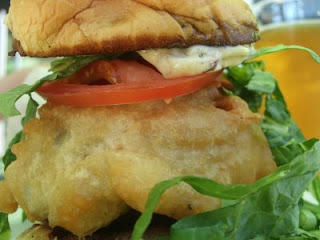 "This is the perfect hangover food." - Mrs. Gastro

After I got the email on Thursday, I wondered if there was a catch. "You and a guest are invited to try the new menu at PYT. Regards, Tommy Up." I also wondered how Mr. Up happened upon my name. Then there was the bit of trepidation that I'd show up today to some sort of shit show and not even get to eat, or worse, it would be like the dream where you're walking through the halls of your alma mater without pants. Thankfully, all of it was unfounded (and I remembered to wear pants), and in place of the anxiety was a straightforward meal that could work at any hour of the day. 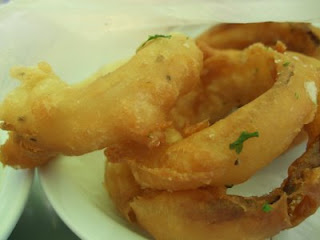 Feeling a bit off from the car ride (if you're coming from Northwest Philadelphia, take note: there's a section of Germantown Avenue closed in a section where you don't really want to have to take a detour, so take Lincoln to Kelly, even if it's a bit longer of a ride), I was pleasantly surprised to see two words that pair better than a porterhouse and a cabernet, "free" and "parking." Having not yet been to the oasis that is the Piazza at Schmidt's, this was an added bonus, especially since we were running a bit late. An immediate seating awaited us, followed by a short delay, followed by a very apologetic and attentive server that completely made up for said delay. A Stone IPA and a coke spiked with cherry soda helped us wash down a simple cheddar burger (I haven't tasted a burger cooked that perfectly since my honeymoon) and a 'shroom burger, whose inspiration I had assumed came from Danny Meyer's Shake Shack (this was later corroborated by Mr. Up himself); you take two portobello caps, layer some cheese in between, batter and fry it, then top it with some special sauce and tuck it into a toasted bun. It's the alpha dog of veggie burgers, or maybe the funny fat kid. Whoever you're comparing it to, one things for sure: somehow it belongs with the meats, even though it showed up under the Bogus Burgers section of the menu. On the side, a sack of fries and a sack of onion rings. While I wasn't much for the fries (hard to get a handful with my mitt-like hands), the onion rings were in my top 3. Sturdy after the initial bite (I hate it when the onion slips out), well seasoned, and well battered. A chewy and sweet success. 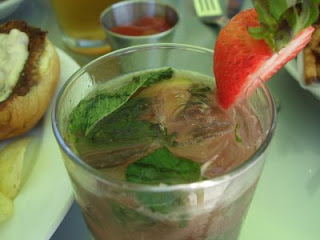 To top it all off, the bartender came out with a special mojito that was more Lucy than Desi (that's good thing): strawberry infused prosecco in lieu of simple syrup, arriving at the latter end of the meal and offering a delicious palate cleanser. Another added bonus? Mrs. Gastro being with child meant two of these for me, and since I also ordered a Kenzinger after the Stone IPA, I gave myself a healthy buzz. Since I'm in agreement with her that this would be amazing hangover food, I guess I'll just have to head back to PYT tomorrow, non-gratis, but it's so good, I'd pay double what they're charging. Buen provecho.

PYT is located in The Piazza at Schmidt's. It's pretty hard to miss the three giant letters in the window, but if you're blind or just more interested in fitness, it's next to the running store. The food's cheap, and it's a great place to hang out. If I didn't have to drive home, I probably would have sat there all day cranking brew doggies. I'd also like to offer my apologies to our waitress. I would have left a bigger tip, but I only had 16 bucks on me. More photos here.
Posted by Fidel Gastro at 3:36 PM