This Burger's Fine, it Walks the Line 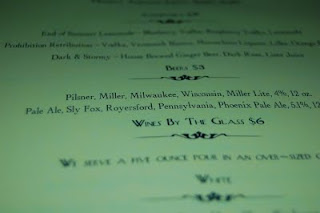 Trying to stay relevant in the suburbs is a difficult thing. I keep things interesting by wearing a light blue pair of cutoff jeans when mowing the lawn (to the disdain of Mrs. Gastro. Sorry, love). In the much more important world of food, you have to toe the line between a menu of crowd pleasers and something a little more edgy. Trying to accomplish this balancing act, albeit with a net, is the bar menu at Alison Two in Fort Washington. 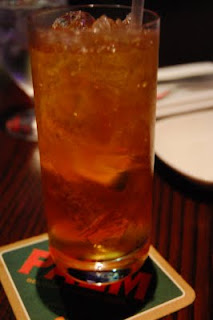 This past Friday was the 3rd Annual "Guys Who Shouldn't Be At a Beefsteak Dinner Go to a Beefsteak Dinner" field trip (previous trips documented here, here, and here). Earlier in the week, I had all but written it off. It was a logisitcal nightmare that wasn't made any easier by the fact that we had guests coming the next day. Maybe it was a second Phillies trip to the World Series, or perhaps it was my uncanny talent for rationalization, but by the time Thursday rolled around, I had changed my mind and accepted the challenge of leaving Philly at 5pm and getting to North Jersey by 7pm, all in the name of stuffing my face with mountainous piles of butter-soaked tenderloin. Then it literally rained on my parade, and for whatever reason, rain really fucks shit up when it comes to being on the road. My ride finally showed up at 6:15 in a gasless Plymouth Neon ("I wanted to wait until we got to Jersey"), and after missing the PA Turnpike exit, we reluctantly accepted defeat somewhere near Fort Washington, where it was either Alison Two or Rich's Deli, and Rich's Deli was closed. 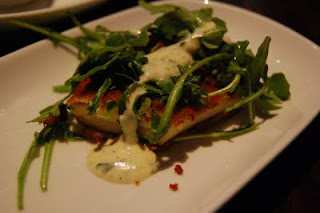 The last time I ate here was with Mrs. Gastro on Valentine's Day, when there were a few food missteps. In order to play down the current man date situation, we decided to sit at the bar, which would have been great had there been seats. Instead, we were seated in a cozy banquette near the wine lockers. Near the bar, but a little more romantic than what we were looking for. Being in the bar area allowed us to eat from the bar menu, so we bailed on the anniversary prix fixe (which looked like a great deal) in favor of a calamari "steak" milanese, a couple of burgers, and an assortment of cocktails and beers including a dark and stormy, something from Ommegang*, and a Brooklyn Belgian Ale. 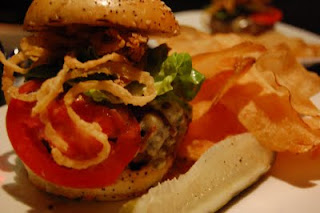 Whoever seasoned the appetizer had either a light hand or bionic taste buds. The calamari "steak" milanese, a breaded and fried squid head served with arugula and a lemony "tartar" sauce, relied too heavily on the arugula for any sort of bite. Eaten alone, it was a high-end fish stick, excellent texture without any flavor. The burger was your standard tony establishment interpretation (that's a good thing), a behemoth of a patty artistically formed to resemble something made by robots (also a good thing), and juicy as a Georgia peach. Topped with blue cheese, lettuce, and tomato, it was like simultaneously eating an iceberg wedge and a ribeye (with my hands). The bun, studded with drug-test-failing poppy seeds, was an excellent patty platform, almost as dense as a bagel, and more than enough structural integrity to keep the sandwich from falling apart. On the bad news side of things was the advertised jalapeño & onion jam, which erred on jam side, all sweet, no heat. The accompanying house made potato chips also missed the mark, having the texture of being cooked in oil that wasn't hot enough. I like a lot of grease, but these poor potatoes were drowning in it.

Service was of the bartender-as-server variety, a little less than attentive, but not to the point where you say, "Man, that guy's a dick." I really wish I would have made it to the beefsteak, but Alison Two at least gave us the opportunity to make some lemonade with the shitty ass lemons we were dealt. Buen provecho.

The bar experience at Alison Two will set you back $40 for an appetizer to split, a bar entree of your own, and cocktails (two) to keep you under the legal limit.
*I was at a bar many years ago and the dude next to me ordered it as an "Omega Man." That was amazing.
Posted by Fidel Gastro at 12:26 PM