Why Did I Eat This? A Trip Down Wing Street 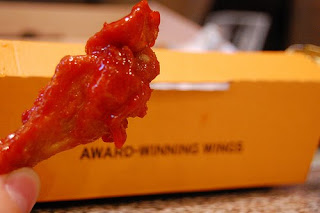 Busy studying for an accounting midterm yesterday, I took a quick TV break in the hopes that I would see Vick get hurt (or at least hit really hard). Instead, I happened upon another Pizza Hut commercial where they pull a fast one with their food (Take that, ususpecting diners!). This time around (and I'm sure you've seen the commercial), it was wings, and since I really like wings and anywhere with a decent batch is not likely to deliver, I figured what the hell? Why not give these "award winning wings" a shot? 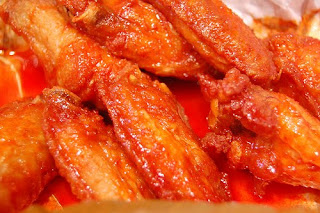 What the hell indeed. This is the third time Pizza Hut has suckered me into a food purchase, and for them, the third time is the charm (although the P'zone was pretty damn good). I'm not sure who bestowed the award upon these wings, nor am I certain what the award was, but I'll stand behind it. These wings were cooked past the point of "you won't die from food borne illness," but not to the point of being dry, although they were so saturated with wing sauce that the overdoneness could have been masked. I like a saucy wing, but not to the point where you get it on your cheek and it stays there because your wife doesn't tell you she sees it until 8pm. Pizza Hut forgot to include any sort of dipping sauce, but since we keep a healthy stock of ranch dressing on hand, this wasn't an issue. I would definitely order them again. 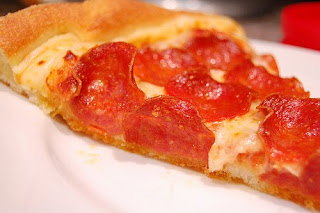 Further contributing to my premature death was a stuffed crust pizza. As if it's not enough to soak the crust in butter, they haul off and put a ring of cheese in the damn thing? And of course, there's me again with ranch dressing in hand, squeezing away (the picture of health). This pizza is so greasy that when I finally take my accounting midterm this coming Saturday, I wouldn't be surprised if there are grease spots on it when I hand it in. Buen provecho.
Posted by Fidel Gastro at 12:08 PM