When the cold winds blow in from the north (or when James googles "beefsteak dinner"), the beefsteak-as-fundraiser season is upon us. Last year's outing left us begging for more, and even the recent move to Philadelphia couldn't prevent me from taking in another beefsteak as soon as I got the chance. With my expectations boiling over, I recruited a fellow glutton to join me on the two hour drive to Verona, NJ, for the Broken Arrow District Boy Scouts of America Annual Beefsteak Dinner. If you think that's a mouthful, have a gander at the (crappy) pictures. 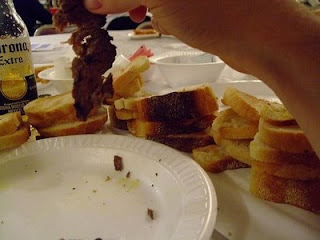 This year proved to be a much more muted affair compared to last, although I'm certain the beer was much more abundant this time around. I imagine this windfall can be blamed on those in attendance, a sparse crowd with a median age of 49. And while the Verona Community Center was a nice facility, the low ceilings and dim lights added to the "4pm dinnertime at the nursing home" ambience. Thankfully, nobody tried to give us the wrong pills or steal our wallets. I'm getting off topic here. Back to the food, which was catered by Nightingale, the original beefsteak catering service since the 1930s. We were running a bit late (Che was even later), and by the time we arrived, the tenderloin was making its final rounds. Thankfully, the two waiters circling the dining room concetrated their efforts on our table, and before we knew it, our plates were piled almost a foot high with buttery tenderloin and crispy freedom fries. It was enough to satisfy, but not enough to make us sick, which was a bit of a disappointment, especially because the final hour of the event did not have a comedy hypnotist to help the food settle. Instead, there were some pretty crappy raffles, made only crappier by DG's preference for statistics over gambling (he put all his tickets into one basket). As the crowd shuffled out, making it awkward for us to stick around and drink, we figured it was time for us to do the same. We were graciously thanked by the organizers for showing up, who were quite surprised that their beefsteak had attendees from both NYC and Philadelphia. We thanked them back by taking beers for the road. Until next year's carnage, buen provecho.
Posted by Fidel Gastro at 9:22 AM