The Cure for the Summertime Blues 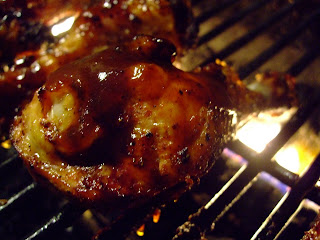 There was some serious backlash regarding the last WhyDIET? post, but that's the intent, people. I eat the heavily marketed crap so you don't have to, thereby saving you both calories and your dignity. However, I have said on more than one occasion that I am an equal opportunity eater, so when I'm not chasing the fast food high, I like to slow things down. 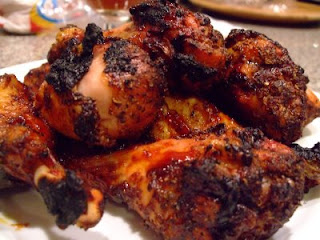 At this other end of the spectrum (the non-shitty end), sweet and spicy takes on a whole new meaning with this barbecue chicken recipe from Serious Eater Joshua Bousel. It turns out that the sauce slathering should be an afterthought, so I focused on creating a zinger of a rub instead, and also made sure that my drumsticks were given at least as much attention as Mrs. Gastro gives to the Jon and Kate saga. Buen provecho.

Mix ingredients together and toss with chicken in a couple freezer bags. Refrigerate at least a half hour and up to twenty-four. Follow the recipe in the link above. More pictures can be seen here. Full disclosure: I used Kraft barbecue sauce, but that shit was bangin'.
Posted by Fidel Gastro at 11:46 AM