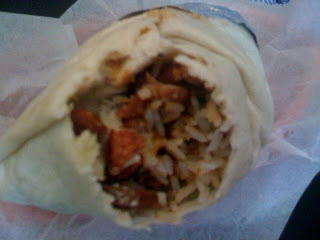 If imitation is the highest form of flattery, then El Fuego must really want to impress Chipotle. Then again, maybe they just want to capitalize on the silent-but-deadly cash cow that is the burrito boom, which, by all accounts, is alive and well in Philadelphia (we took the detour to El Fuego because the Qdoba line was out the door). There were a few missteps, but the next time D-Tron says, "You're coming with me to get burritos. Pick a place," I'll probably pick El Fuego.

Decorated and set up almost exactly like Chipotle, El Fuego has the same spacious and minimalist feel without the "hurry up and eat so others can sit down" vibe. I probably could have stayed there all afternoon (they serve beers, so I may have to make this happen one day). Going down the burrito assembly line, you have your usual suspects: grilled peppers and onions, grilled chicken, grilled beef, stewed beef, chorizo (I suppose they have to separate themselves somehow), and hot, medium, and mild salsa offerings. I went with the chorizo and immerdiately regretted it. I have a very specific idea of chorizo in my head and it's not the kind that looks and tastes like Hillshire Farm smoked sausage. Same foil, same basket, same price (same rice!), but when I peeled back said foil, the damn thing was cold, and the tortilla was brittle. The flavor was as you'd expect from the other guys (a very good thing), but eating a burrito is no fun if it falls apart on its way to your mouth. I'm hoping the next time will yield much better results. Until then, I'm going to tuck into the burrito lethargy that is par for the course with such a huge lunch. Buen provecho.
El Fuego is located at 2104 Chestnut St. and also at 723 Walnut St. I got way too much much food for $7.50. The tap water was free. And yes, that's a crappy picture.
Posted by Fidel Gastro at 1:54 PM