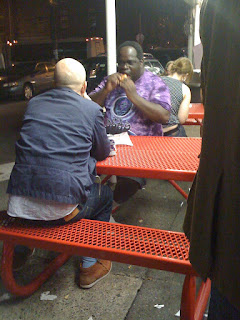 Pat's: 6
Geno's: 0
Delassandro's: 2
Steve's: 1
Street Meat: 4
Other: 8.5
Total: 21.5
One must lower their expectations when it comes to ballpark food. Case in point, the Tony Luke's in left field at Citizens Bank Park. Steak-umm quality meat that tasted boiled, not grilled, and less salt than a sugar factory. I wish I would have opted for "The Heater" over at Campo's (cheesesteak with hot sauce and pepper jack, I think), but by the time I saw the 6'x3' airbrushed sign, the cheesesteak runners were already pretty far up the line and not very patient. It's a very good thing, then, that the night would inevitably lead to multiple cabs to Pat's, where the line wrapped around the building almost twice thanks to the Dead concert (aren't hippies supposed to be vegetarian?). Entirely worth the wait, especially when you're brown bagging Schlitz and discussing with Al Roker's brother whether or not you think touring without Jerry is sacrilege. Buen provecho.
Posted by Fidel Gastro at 4:49 PM