I Am a Mexican Grandmother - The Tamale Marathon 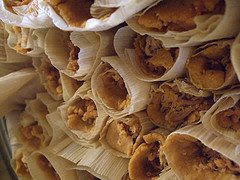 In my formative years, Ma and Pa Gastro spent much of my youth trying to hide my Hispanicity (is that a word?). I'm lucky that it was only on the surface. Behind closed doors, we ate beans and green chile every night, sopping up whatever was left on the plate with freshly made tortillas. Now that it's cool to be Mexican, I've come out of hiding, and my Gastro-in-laws have welcomed me and my culture into their family with open arms. As a gesture of gratitude, I agreed to make tamales, something traditionally reserved for a busy kitchen full of old ladies. Lacking the old lady support, I enlisted the help of a Texan who married into the family, and we began the arduous yet fruitful task. 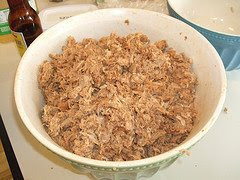 It all starts with a hefty order of pork and chicken. We used a Boston butt and a whole roaster (6 lbs each) from Haring Brothers, an old school country butcher just outside of Doylestown. The meat preparation is simple. Boil until tender (each took about 2-1/2 hours), cool, debone, and shred (and don't forget to reserve the broth). Mix in some secret spices and corn oil, and you have your tamale meat. 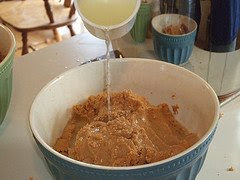 Next, make the masa, a dough made using specially treated cornmeal (sold under the name Maseca in the "ethnic foods" aisle), corn oil, secret spices, and the reserved broth. I mixed this by hand (as a Mexican grandmother should), but next time I may opt for the stand mixer. 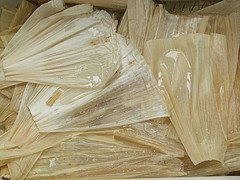 The end result will be spread into dehydrated corn husks soaked in water (these are also located in the "ethnic foods" aisle), topped with the meat, and rolled up like one of those herbal cigarettes that the long haired kids used to smoke in high school. This is where things begin to resemble a sweatshop, because you've already logged eight hours, and there's no chance you're going to stop with ingredients begging to meet their tamale destiny. So you roll on and stack up, and just when you think there's a light at the end of the tamale tunnel, you still have to steam them. Another two hours--fueled by Pacifico and Jim Beam--and a silent prayer that your Mexperiment doesn't turn out to be a disaster. 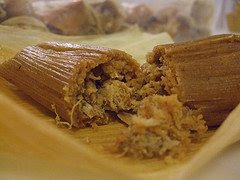 Then, as hour thirteen silently passes, you burn your hands removing the first tamale from its husk, cut into it, and rejoice at your accomplishment. A midnight snack so deliciously addictive that my late abuelita would be proud. One hundred tamales later, I survived, along with my Texan Gastro-in-law, the marathon. Buen provecho.
Posted by Fidel Gastro at 12:00 PM