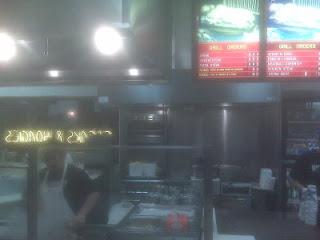 Pat's: 5
Geno's: 0
Delassandro's: 2
Steve's: 1
Street Meat: 4
Other: 8
Total: 20
Mrs. Gastro and I refilled our culture tank last night by taking in a documentary screening at Philly Cinefest* Being in West Philadelphia, and being that we were a block away from Abner's, the night really wouldn't have been complete without stopping in for my on campus classic from back in the day: cheesesteak with fried onions, American cheese, and mayo (yes, mayo). I don't do whiz here because it's not really whiz. It's a pretty standard steak of the chopped variety, albeit much greasier than others. What used to set this steak apart was the cook manning the flat top. Such a nice (and stoned) guy. I recall one evening when he was willing to deep fry a cheesesteak, saying, "hell, for an extra five bucks, I'll step on it" (too bad we chickened out like a bunch of drunk chickens). Not that I expected him to be there after all these years, but it was still sad to see that the Dave Chappelle look-alike has been replaced with a shorter, rounder, less bald, and more mustachioed steak slinger. At least the cheesesteak hasn't changed, nor have the waffle fries. Buen provecho.
*The documentary was called Heart of Stone and it's about an inner city school with some unconventional but effective ways of dealing with the students. Mrs. Gastro and I loved it. Check it out if you get chance. I think you can watch it on IFC.com on 4/16/09.
Posted by Fidel Gastro at 8:57 AM