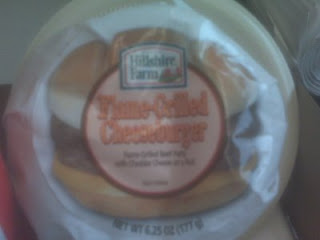 There was a six month period in 2003-2004 when I would buy the Costco version of these by the dozen, relapsing on an old high school habit that my father turned me on to as a replacement for his love (love = love handles = blame your parents for your shortcomings). So with the same tinge of nostalgia the led me back into the arms of Taco Bell, I treated myself to a "Flame Grilled Cheeseburger" aboard the Amtrak train, where seeing actual open flames would probably be a bad thing. Luckily I've been down this road before, and it was no surprise to see it emerge from a commercial grade microwave, piping hot except in the middle, where it's always cold unless you want to chip your teeth on an overwaved bun. I would have been much happier if there were microwave french fries to go with it, but a bag of Utz was just fine. 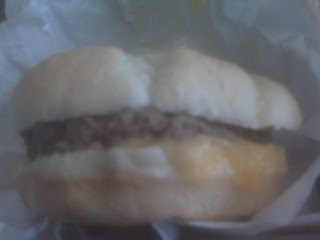 Tearing back the microwave-safe wrapper, I recognized some old friends: leathery cheese, asphalt patty, cloud white bun. Biting into it, I remembered a time when I would knock out two or three of these in one sitting. Artificial grilled flavor ranks up there with artifical grape flavor. Sometimes, the artificial flavor is what you crave. Without the nostalgia, it probably would have been just as good, but for $5.50, I think I would have rather had 30 chicken nuggets from Wendy's (that's a lie. I just like the 99 cent value menu metric). Buen provecho.
Posted by Fidel Gastro at 12:40 PM