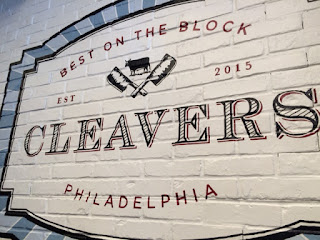 After Spike Mendelsohn unceremoniously opened a Philly outpost of his Good Stuff Eatery in June of 2014 and then closed it a little over a year later, the lights are back on at 108 South 18th Street, this time in the form of a cheesesteak joint called Cleavers.

Although there wasn't much rework needed in the wake of Good Stuff Eatery's gut renovation of the space, the owners were smart enough to repaint and re-wallpaper all of the nonsense left behind by Spike's branding team. Unfortunately, they overcompensated a bit, plastering their namesake all over everything, including the salt and pepper shakers. They even have an actual brand they use to emboss their cheesesteak rolls (this is actually pretty cool but doesn't work as well as it should).


After my first bite, the reason for all this pomp and circumstance became dreadfully apparent.


This was a bad cheesesteak.


It was Upper mezzanine Aramark concession stand bad. Mall food court in Salt Lake City bad. Random country in the European Union trying to make a buck by leveraging Americana bad. Send it into Mikey Il's "This is Not a Cheesesteak" tumblr bad. 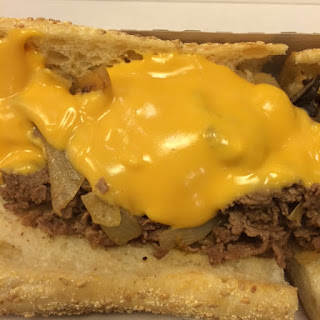 The seeded roll was so dense that I felt like a dog tearing at a chew toy in an attempt to extract the plastic squeaker with every bite. Each time, I lost a bit more of the underseasoned meat as it fell to the plate along with glob after glob of cheez whiz (at least they're using actual cheez whiz) until I was eating nothing but (bad) roll. The fries, of the crisscut variety, were also lacking in the salt department and soggy. In what seemed to be somewhat of a social experiment, there was one bottle of ketchup for the entire dining room (I hate ketchup so this didn't really affect me plus this is kind of petty because they just opened a week ago). If it actually were, I'm happy to report that humans, at least when fed, are generally friendly and willing to share their precious ketchup.

I'm not sure how (or if) they'll fix the bread situation, but I'm sure I'll give the place another shot in the near future. Hopefully by the time I go back, they'll have fixed the rest of the kinks as well, provided they don't shutter first. Buen provecho.

Email ThisBlogThis!Share to TwitterShare to FacebookShare to Pinterest
Labels: Center City, cheesesteaks, Snap Judgment, steak, Top Chef, Why Did I Eat This