Why Did I Eat This? Lance BOLD Crackers 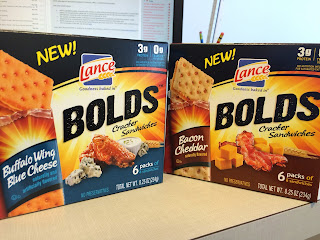 The latest in an effort to blanket the entire world in buffalo wing sauce (and then top it with bacon), Lance BOLDS cracker sandwiches grab their nerdier counterparts by their day-glo orange shoulders and kick them square in their Toast-Chee nuts. Remember the Bonestorm episode of the Simpsons? That was me at the grocery store yesterday. I told my entire family to "Buy me Lance BOLDS crackers or go to hell!"*

Fast forward to 10am this morning, when I'm ready to make snacktime EXTREME!  The spokesbro for Lance BOLDS is Nyjah Huston, a 20-year old skateboarder who's had a skateboard under his feet from the time he could walk. Armed with that knowledge, I'm expecting to be able to switch kickflip at least 10 stairs after my first cracker.**

I started with Buffalo Wing Blue Cheese, which have the same orange hue as Lance's Toast-Chee variety. I expected a pronounced artificial flavor, but instead got a mouthful of heat and an excellent rendition of blue cheese flavor. These were the best approximation of buffalo flavor I've had since Herr's Buffalo Blue Cheese Curls.

With my mouth on fire and expectations riding high, I moved on to the Bacon Cheddar flavor. What should have been another roundhouse kick to the face turned out to be a disappointingly bland and crumbly cracker. I should have been on high alert after noticing that the "bacon" crumbles studded into the cracker itself resembled a bunch of scabs, which is probably what happens after you assume that you'll be good at skateboarding after eating these cracker sandwiches.


There's a third flavor, Pizza (yes, just plain old pizza), but fuck that shit. I guess one out of three ain't bad, especially since the Buffalo Wing Blue Cheese (BWBC) flavor was so damn good. Stay tuned for an update on how much better I am at skateboarding after eating these. Buen provecho.

*Actual Interaction: Me putting two boxes of crackers in the shopping cart and then moving on to the coffee aisle.
**Ed. Note: Lance BOLDS makes no guarantee about improving ability to skateboard.
Posted by Fidel Gastro at 4:09 PM