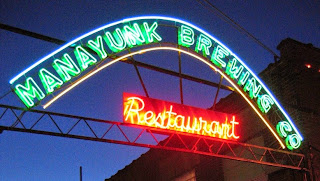 Maybe it's the fact that we decided to go out for dinner on Monday. Maybe this past Monday was, in general, one of those Mondays that gives Mondays a bad rap. Or maybe, just maybe, the Manayunk Brewing Co. has decided to mail it in with their food now that their beer is a level above your ambitious neighbor's "Dave-Brau."

At the risk of sounding like an insufferable Yelper, I'm going to bitch and moan for a few paragraphs in order to get this meal off my chest. Before I launch headlong into it, I will say that the service was great, albeit slow.

But the food was an absolute atrocity.

No sushi on Mondays, I get it. My daughter, not so much. Her reluctant second choice, apples drizzled with caramel for dinner. Three apple slices, two strawberry halves, six bucks, and none of it eaten.

Mrs. Gastro and I (since there was no sushi) decided to split fish tacos and artichoke dip. No fish tacos. Our reluctant second choice, a veggie burger that was allegedly house made. The provolone cheese and mayo both failed to mask the taste of freezer burn. The artichoke dip was another loser. Ten bucks for a baby handful of stale chips and a ramekin of brown goo.

The only bright spot on the table (which was covered in outdoor filth and pollen) was my son's chicken fingers. Unfortunately, he's not real big on sharing these days.

At the end of it, we dropped 70 bucks and got in a big fight. Two days later, I'm still depressed and angry. I guess the moral here is "Don't go out on Mondays, but if you do, get the chicken fingers. And now, a stupid Dos Equis meme to support this point. Buen provecho.