Distilling the Douche Out of Manayunk, One Craft Beer (and One Burger) at a Time 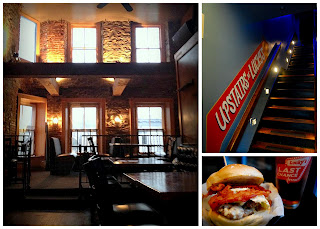 Just in time for the September installment of Manayunk's First Friday, owner Chris Barnes and his crew at Lucky's Last Chance pull off a Robert Irvine-worthy transformation of their second floor from pseudo-club to seats aplenty.  I chatted with Chris during the demolition last week to find out why Lucky's bucked the trend of $3 u-call-its and (insert fucked up candy flavor here) shots that has been Manayunk's SOP for as long as anyone can remember,* and it turns out that the past year of being open was an experiment that ran amok. "We did the whole burger thing on a small scale to start out. We knew we had to cater to a certain population here on Main St, and that's why we kept Upstairs [at Lucky's].  We weren't really sure how far the burger and craft beer thing would go."

He's right, though.  Craft beer on Main St. can be a  tough sell.  On the one hand, you've got college kids (or the recently graduated) who favor quantity over quality, and on the other hand, you've got old-ass Main Liners who jump in their tiny-ass Mercedes coupes after drinking way too much wine at Derek's or Jake's.

Fortunately, there's another demographic slowly materializing, and with another level of seating and additional taps, Lucky's Last Chance will be ready for them tonight.

"We're not changing much, just adding tables, really," Chris says.  Still, it's nice to have an option in Manayunk where the food is good and I don't feel too old, too young, and I can bring the kids.  Buen Provecho.

*Nothing wrong with this, folks. Just stating facts.
Posted by Fidel Gastro at 10:05 AM