Weighing in on Wells, or Guy Bites Big 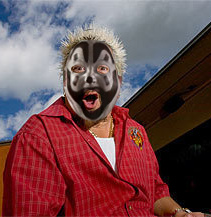 By today, most of you have seen Pete Wells' takedown of Guy's American Kitchen & Bar. Already heralded as a thing of beauty by aspiring food writers and other folks that rest comfortably outside this restaurant's target market, the questions-only review takes a megadump on the newest Times Square megarestaurant branded by the goateed specter that haunts my nightmares, Guy Fieri.

It's a fun read, but the joke's on us. While we get to maintain such things as our dignity and our hair color, this clown's laughing all the way to bank. He cleared $8 million last year, and I would imagine that much like Krusty, he signed off on the use of his name and all of those dumbshit menu items after a dump truck full of money showed up in his driveway—too busy to think about anything but the dollar signs because he was "rollin' out!" to the next triple-D shoot.

We're hopeful that Mr. Fieri is investing this cash in something other than hookers and coke, especially if he's planning to continue diluting his brand. In the meantime, let's get back to Mr. Wells, for whom I have a few questions of my own regarding the expectations of this review:

Did you really expect this place to be good? Did the New York Times also review the Bubba Gump Shrimp Co. when it first opened? Would you expect your readers—most of whom use the company card to impress clients—to entertain a night out in Times Square? Are you fucking kidding me with this? And one more time, just to make sure—did you really expect this place to be anything other than a T.G.I.Friday's with a different name?

More heartbreaking than this wasted review, however, is the scene that just played out in my mind. Guy's sons, Hunter and Ryder (as if we needed more fuel for the ridicule fire. Plus, that sounds terrible together), are seated at the dinner table, staring longingly at their mostly absent father. The family's eating a Papa John's pizza and Guy closes the lid after grabbing a fourth slice. Not sure what to make of the sad faces (because there's still plenty of pizza left), Guy asks them if there's a problem in flavortown, to which the older one replies:

"Dad, why does everybody hate you so much?"

You know what's worse than being Guy Fieri? Getting beat up because your dad's Guy Fieri. Buen provecho.
Posted by Fidel Gastro at 10:28 AM

Email ThisBlogThis!Share to TwitterShare to FacebookShare to Pinterest
Labels: destination eating, extreme sports, macho bullshit, tourism, Why Did I Eat This