My Friends are Cooler Than Your Friends: Kelvin Natural Slush Co. 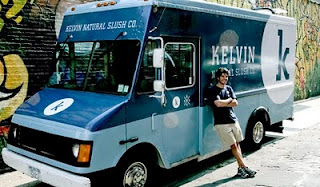 Stories about former suits saying "fuck it" to pursue their dreams have become so commonplace these days that it was only a matter of time before the protagonist would turn out to be a long lost college buddy, so it came as no surprise when I found out that Alex Rein was behind the wheel of the recently opened Kelvin Natural Slush Co., a truck dedicated to slanging slushies.  True, he never seemed to be the "company man" type.  In college, we broke bread over cheesesteaks, likely having a profound conversation* that would ring in his ears almost 10 years later, telling him to bag the briefcase in favor of the freeze.  Since July, his big blue truck has been rolling around the streets of Manhattan serving up a refined riff on Slurpees that the rest of us suits would be proud to bring back to the office (or use in concert with the liquor of our choosing to numb the pain of being a suit).  Kelvin's been well received by Manhattanites, and Grub Street announced yesterday that they're up for a Vendy in the category of best dessert.  Amidst the craziness, Alex was kind enough to answer some questions for me.  I've yet to try the slush, but hopefully I'll get up there soon.

*Actual conversation may not have been very profound

Fidel Gastro: So you're on the road now. How's it going so far? I remember a lot of disappointment when it came to slush machines. The flavor I always wanted was on the fritz. The equipment seems tough to work with. Any technical difficulties since you've been on the road?
Alex Rein: When things are operational they have been really good. There has been a great response to our product which has been very exciting for us.  The equipment was a source of a lot of headaches early on, but has been better more recently. As you pointed out, the slush machines seem to be fairly temperamental to begin with, and add to that the fact that they are bolted down in the back of a truck rattling around through the streets of New York makes them that much harder to deal with.

FG: Tell me truth. Did you go rogue because you discovered that your law firm was involved in some sort of conspiracy and are now trying to take them down? Do you also have highly sensitive audio equipment in the truck?
AR: Behind the facade of a slush truck lies a highly sophisticated surveillance vehicle which was modeled after the truck from Sneakers.  I’m only telling you because you are my friend, so try to keep that quiet.

FG: So what's actually back there?
AR: Everything you would need to run a store: refrigerator, freezer, sink with running water and storage.  We have three high capacity slush machines that are each able to produce about 18 gallons of slush per hour.  The machines are filled directly from tanks that are located in the refrigerator.  It is all very fancy.

FG: Who did your truck? Did it have to be fully custom?
AR: The truck was all custom fabricated by a guy out in Queens who builds food trucks.

FG: What's the story with the slush equipment? Are you going for a Slurpee consistency or something similar to Italian Ice?
AR: We are going for something closer to a Slurpee consistency, but the difference is our slushes are not carbonated.  A Slurpee is mostly air. The machines we use are top of the line, so they produce very fine ice crystals which make for a very smooth texture.

FG: Do you have standard flavors or a rotating cast? Will any of them turn your tongue blue?
AR: We are offering three flavors: Ginger, Tea and Citrus, which you can customize by adding your choice of pureed fruit or chopped mint or basil. We are always keeping our eye out and testing new mix-ins to offer.  We expect to add new base flavors of slush to rotate through at some point, but they take a long time to develop, so for now we are sticking with our three base flavors. Kelvin slushes are all natural with no added coloring, so there isn’t anything that will stain your tongue blue.

FG: I've read the concept was born out of the need to be taken seriously with a squishee/slurpee/icee in one hand and one of those boxy lawyer briefcases in the other. Did you ever take a Slurpee to court with you?
AR: I was not a litigator, so I didn’t spend any time in court.  Most of my time was spent in an office working on documents, which I can’t say that I miss.

FG: Did you ever spill a Slurpee on highly sensitive legal documents?
AR: There are very few 7-11s in New York City, and none were close to my office, so I can happily say that I never had to explain ruining a document because I spilled a Slurpee on it.  I’m pretty sure that would not have gone over too well.

FG: Alright, enough about the law. Are your routes going to be exclusive to Manhattan? Any chance of venturing to the outer boroughs? A U.S. tour, perhaps?
AR: For right now we have been focusing on Manhattan, but we will definitely be exploring the other boroughs. No real plans to take the truck on the road as of now. Knowing how difficult it was to navigate the different government agencies in NY to get the permit for the truck and the vending license it just does not seem realistic for us right now, but maybe down the road.

FG: Do you envision a fleet of Kelvin trucks, maybe another concept for the wintertime?
AR: Our permit allows us to vend year-round, so we are going to be out on the street for as long as people are buying slush.  Long term, we would love to expand, just not sure what direction we will take it in yet, maybe storefronts.

FG: Where can we find you? Twitter? Facebook? I heard there's a slush hotline to get your latest whereabouts?
AR: We can be reached on Twitter at @KelvinSlush, on Facebook, and we do have a slush phone that lets people know where we are going to be.  Sometimes the old school technologies are just as effective as the new ones. All of this can be found on our website.

FG: Anything else for the readers?
AR: I think that covers everything. Hopefully you can come up and try a Kelvin slush soon.
Posted by Fidel Gastro at 11:48 PM

Email ThisBlogThis!Share to TwitterShare to FacebookShare to Pinterest
Labels: food trucks, My friends are cooler than your friends, Slurpees