Why Did They Eat This? 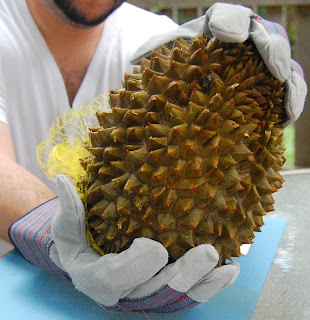 Behold, the durian fruit, an oversized exotic pine cone full of what good pal Mark Novasack called "mayonnaise with hair in it."  Uncut and frozen, there's little evidence of the putrid smell so widely documented (there's even some folklore about your stomach exploding if you combine it with alcohol), but what lies beneath the surface is a deceptive fruity aroma that gives way to a subtle yet gag-inducing fart smell.  At least that's what happened when I got close.  One would think that the need to wear puncture-resistant gloves while handling it would be enough for you to steer clear.  This was not the case for two friends of mine, who, after watching Andrew Zimmern gag on the thing, decided to have a durian fruit showdown.  Whoever can eat the most durian gets to choose a costume that the other has to wear for 24 hours--at work, at home, and more than likely, a happy hour with cheap enough drink specials to make you forget that you lost the bet after subjecting yourself to such gustatory torture.  Dubbing themselves Eva Pierogi and Borscht Yeltsin (damn creative guys), we filmed and photographed the challenge.  And yes, we were drinking, and no, none of our stomachs exploded, although it would have been really cool and really messy to see that happen. Check out the photos and videos after the jump.


I could barely smell the thing, and it was still partially frozen:


Borscht Yeltsin gives it a try:


Then I give it a (very unsuccessful) try:


Then I sit back and watch as Eva Pierogi cleans the durian seeds of their rotting yellow flesh, described by her as liposuction fat. You can tell by their faces that they're both really enjoying the fruit's unique flavors and succulence:


Here are a few choice moments before declaring the victor: 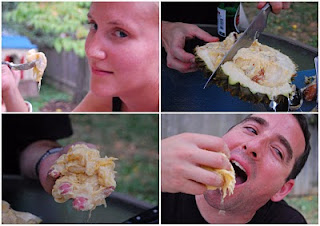 And finally, we make the announcement.  After failing to finish his half and conceding four times (the first three didn't count), Borscht Yeltsin will be wearing a pair of Eva Pierogi's jean shorts for a full day:


I think he could save himself some embarrassment/be a conversation starter if he painted a cucumber and hung it from one of the leg openings, but that's just me.  I can't wait for these two to dream up another humiliating challenge.  Hopefully the next one won't be so smelly.  Buen provecho.
Posted by Fidel Gastro at 11:12 PM

Email ThisBlogThis!Share to TwitterShare to FacebookShare to Pinterest
Labels: durian, extreme sports, macho bullshit, Why Did I Eat This