At the risk of having a trio of douchebags materialize out of thin air, I went ahead and ordered the Bacon Club Chalupa, thus falling off the Taco Bell wagon once again.  Granted, I was in a drive-thru on City Avenue, where the likelihood of a combination stabbing/carjacking is ten times that of getting hit on by a few feathered-hair passersby than it would be in the brightly lit and clearly exclusive club shown in the above commercial, so I wasn't too worried about an onslaught of douchebags.  I'm also a dude.  I also do my best not to carry a clutch, but every now and again, it's unavoidable.  But enough about my fashion sense.  Let's talk about what happens when Taco Bell runs out of ideas thinking outside the bun and goes back to thinking inside the bun. 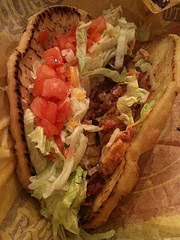 The Wall Street Journal, master of the obvious, is only now stating what we already know: people love themselves some bacon.  Pork belly prices are up 53% from last year. But my favorite part of the article is the fact that bacon demand coincides with an increased consumption of BLT sandwiches in the summer (if I was one to write "WTF," this would be where I would write it).  Thinking back, I don't recall summer being associated with BLTs, but apparently Taco Bell is hip to the game.  Let's see how it stacks, er, folds up against what the Journal claims to be summer's most popular sandwich:
1. The crunch of the toast, even though it doesn't get its name on the marquee, is one of the most important parts of the BLT.  The chalupa shell, limp from an extended bath in the fry grease, was a terrible proxy for the toast.
2. The lettuce and tomato were minutes away from being rancid.  Even the smoky flavor of the bacon couldn't mask the acrid taste.
3. Speaking of the bacon, it was diced so small that I could have snorted it.
4. The chicken was barely there, maybe a chunk or two, and not worth commenting on.
5. Another key ingredient to the BLT is the gloppy, oozes-out-the-side mayonnaise (a very good thing).  In its stead, Taco Bell substitutes "club sauce," a watery thin condiment that looks and tastes like whitewash.
I think there's a concurrent promotion happening with the cheesy gordita crunch.  If you're going to fall off the wagon, it's really the only thing worth ordering at Taco Bell.  If you don't believe me, ask the other 2,693 people that like it on Facebook.  Yes, the cheesy gordita crunch has more fans than me on Facebook.  Get liking people, and use your disposable income for better things than a bacon club chalupa.  Buen provecho
Posted by Fidel Gastro at 2:34 PM

Email ThisBlogThis!Share to TwitterShare to FacebookShare to Pinterest
Labels: artery tartar, extreme sports, fast food, Taco Bell, Why Did I Eat This