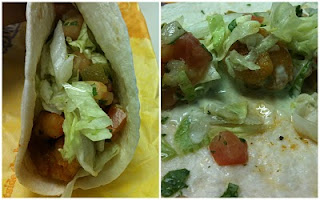 The Butterfly Effect was a really stupid movie. On the contrary, the concept of one event being able to change the outcome of your situation is fascinating. Case in point, the haircut lady I normally go to quit/was fired from the place in Suburban Station, so instead of switching up my look from a fat Justin Bieber to something a little more grown up/professional, the time spent doing so was immediately reallocated to tracking down Taco Bell's latest offering, the Pacific Shrimp taco. Suspending all better judgment in the name of "Why Did I Eat This?", here's a rundown of what surprisingly didn't suck as much as I thought it would (but still sucked pretty bad):

1. The shrimp, which I imagine (hope) comes pre-cooked, were not texturally offputting, and they had a decent kick to them.
2. The sauce, a thinned out mayonnaise with flecks of dehydrated herbs, was bland, and most of it leaked out after a few bites.
3. Three bucks for one taco makes me feel better about the quality of the shrimp, but it also makes me feel stupid for spending three bucks on a single item at Taco Bell.
4. The rest of the composition was standard issue yellowish brown lettuce, mealy tomatoes, and a damaged tortilla to hold it all together.
5.  I didn't eat the thing too long ago, so the possibility of getting really sick from eating shellfish at Taco Bell is still very real and very frightening.

As the impending doom digests, I leave you with this: if you must partake in the unholy union that is seafood and fast food, do yourself a favor and stick with a Filet-o-Fish.  Buen provecho.
Posted by Fidel Gastro at 1:53 PM