Green Chile: Worth the Food Miles 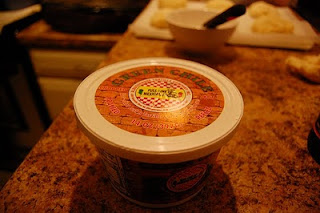 A recent article posted in the Atlantic's food section gives a nod to Mormon cuisine, an ironically sacreligious mess of processed and highly caloric foods laid atop a jiggly foundation of Jell-O (I suppose procreating at a methamphetamine-addicted rabbit's pace leaves little time for food).  Growing up there as a triple minority (poor, Messican, and Catholic), I was not privy to many of the staples mentioned in the article (although I do reserve a special place in my heart for Cool Whip).  Had I been, I'd probably be a lot fatter than I am now.  Instead, every year just before school began, I was shuffled into the backseat of a car at 4am for a no-stops-allowed-just-pee-in-this-cup drive to New Mexico to pick up enough beans and green chile to last us the whole year.  Bland was not an option in the Gastro household, and neither was anything from a can.* 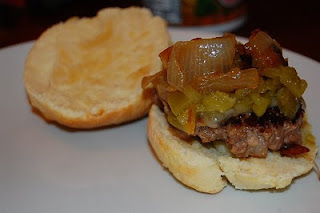 Years later, there's very little I miss about Salt Lake save for my folks (and their delicious Navajo tacos), and it was their own green chile addiction that has resulted in them now being forced to stuff their suitcases with it every time they visit (not that my father really needs much room for the only things he packs, a ratty Penn sweatshirt and a threadbare t-shirt he's worn since I was 10).  Only now--when I'm even further away from the land of enchantment--do I appreciate my folks' effort of a 13-hour drive and a marathon week of roasting burlap sackfuls of green chile. I suppose being an outsider did have its perks. 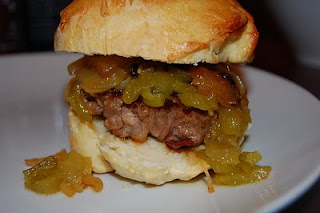 On its own, roasted green chile adds a unique flavor and texture that opens your sinuses without making your eyes water.  In a stew prepared with chunks of pork, tomatoes, garlic, and onions, it will warm your soul's soul.  Recently, I had the chance to spread the gospel of green chile to Marc Sanders of Burgatory.  We topped his signature burger and homebaked buns with the stuff, and the results were both mindblowing and tongue-numbing.  Paired with a helping of sweet potato home fries and a few pale ales, it made for a great Sunday afternoon.  If you're ever in New Mexico, make sure to order green chile on everything, and not just because you can.  If you're out here on the east coast, drop me a line, and I might be willing to share some of my stash with you.  Buen provecho.

*Full Disclosure: After my folks opened a restaurant, there was little time for home cooking, so there was a time when I did eat a lot of fast food/processed food/canned food, the same crap I continue to eat to this day.  They still managed to make the trip each year, but I figured it should be known that home cooking was not exactly the norm during my teen years.
Posted by Fidel Gastro at 3:32 PM