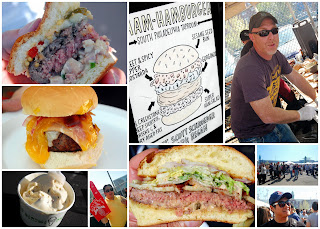 It would be nice if we humans could evolve to the point where our collective metabolisms catch up to the amount of food we produce/consume rather than just becoming a bunch of fat shits. That way, instead of only being able to eat nine or so of the burgers at this year’s Burger Brawl, every last one of us at the event could have enjoyed all twenty-four.

Alas, the finiteness of our stupid stomachs brings regret not from eating so much, but from eating so little (relatively speaking). I suppose when you say you’re upset that you only got to eat nine(!) burgers, you’ve got problems. Or you’re American.

Congrats to Fat Jack’s for being the jewel of the judges with their "Memphis Mauler" burger, and to Lucky’s Last Chance for getting the crowd’s crown with their Peanut Butter and Bacon Burger. And congrats to the rest of us for enduring sunburns and meat sweats in the name of competition and philanthropy. Buen provecho.

*Regarding the event itself, I can't stop thinking of Percy St BBQ's offering (middle left), a mouthful of egg yolk and country ham that had the silky texture of prosciutto with vinegar onions to balance all of those riches. I was also quite partial to South Philly Tap Room's Ham-Hamburger, because I hate ham salad (too sweet), but I fucking love SUPER ham salad, something Scott Schroeder came up with while "shooting darts."
Posted by Fidel Gastro at 11:29 AM