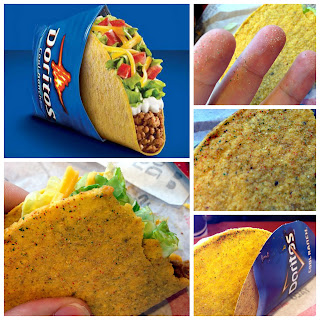 The trouble with gimmicks, even the bright orange crunchy ones, is their inherent lognormal distribution. Out of the gate, Taco Bell's first Doritos Locos taco was in heavy rotation, and rightly so. The "oh shit why didn't we think of that before?" combination of crappy fast food and crappy snack food was a monumental success, but like beating Street Fighter II on one quarter with Blanka for the 30th time, its novelty faded, settling beyond the third sigma where one can comfortably avoid being seen making a run for the border and heard in the toilet immediately following. I lost count of how many Doritos Locos tacos I have eaten since their debut almost a year ago, and it has been at least a month since my last one.  I had all but forgotten about the brilliant combination until Hahri Shin's Twitter feed reminded me that the brain trust at Taco Bell was diversifying their Doritos Locos portfolio with a Cool Ranch shell. And it would be ready a day early. And that day was today (well, yesterday, since you're probably reading this on Thursday).

With curiosity and expectations high, I made my way to the nearest Taco Bell thinking my life would be changed once again. That was my first mistake.

While just as good as a Taco Bell taco can hope to be, it didn't deliver like its Nacho Cheese predecessor. The seasoned "beef" overpowers the Cool Ranch flavor instead of complementing it like it does with the Nacho Cheese. The first bite works, but as you get to the middle, the Dorito just gets lost. My second mistake was not ordering a supreme version. I think the sour cream and tomatoes might have amplified the little red, white, and green bits on the shell. If nothing else, they would have added a bit more depth to an otherwise disappointing taco.  Call it a sophomore slump or whatever you will, but it's best to stick with the Nacho Cheese. If you have no intention of trying either or you need some help deciding, then please allow me to explain in the context of North Korean leaders. 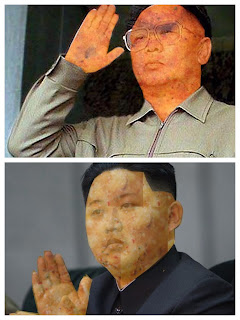 Both tacos are capable of launching a nuclear assault on your intestines, but one's just not as powerful, even if he hangs out with Dennis Rodman. Buen Provecho.
Posted by Fidel Gastro at 8:09 AM

Email ThisBlogThis!Share to TwitterShare to FacebookShare to Pinterest
Labels: artery tartar, cheap eats, Taco Bell, Why Did I Eat This