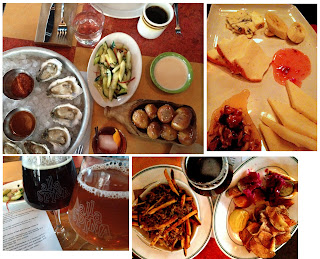 It took a little over 365 days for me to finally get to Alla Spina. Those following me on Twitter know that the reason for the delay could be attributed to beef jerky and/or the fact that I'm usually too drunk to drive, but whatever the excuse, I'm happy to say that I finally made it to the North Broad birreria this past Friday. Since I'm a year late to the party and you probably already know about the grafitti, the pig with leg warmers, and the negronis on tap, I'll keep things short and sweet by telling you what I ate and why you should do the same (or I'll go off on a bunch of tangents about shit that doesn't make any sense whatsoever).

Joined by lyme disease survivor/former roommate/secretly cyborg/good friend of mine D-tron (remember what I said about tangents?), most of what we ordered came from the happy hour menu, an extensive list that included must-order items such as the mortadella hot dog. In addition to the deep fried dog, we got a half-dozen oysters, the house-made pretzels with beer cheese sauce, and the poutine (theirs is made with guinea hen and mozzrella curd). To drink, I started with a negroni (because it was on tap). Artfully presented with a giant ice cube, the only bummer was that it limited the subsequent beer-drinking to two, a Baladin Wayan Sour and a Yards Old Square Spruce. Happy hour was ending, so I ordered them at the same time, which is like buying two albums at the same time, which you should never do, because you just won't pay attention to one of them (this happened to me with Primus and Helmet back in '92. Sorry, Sailing the Seas of Cheese). The Baladin was great, but even with its list of 17 ingredients, it was less memorable than the Old Square Spruce. The result of a barrel-aging tennis match elaborated on here, the best way to describe its flavor is melted Coca-Cola slurpee with a subtle pine finish (a very good thing). Now back to the food:

Oysters: The oysters on special were called "Little Bitches," and goddamn those little bitches were great. Medium-sized and buttery, they set the tone for the rest of the food.

House-made pretzels: Say what you wish about Auntie Anne's, but pretend you don't like that lacquer of butter and sugar and I'll be the first to note that your pants are engulfed in flames. Alla Spina's had that same sweetness, but the consistency was much fluffier. It was almost like eating a donut. A donut that I could dip in cheese sauce at my leisure.

Mortadella Hot Dog: Perhaps it was the dollar dog deal of yesteryear that pushed this to the front of my mind, but I'm glad we ordered it. The dog was great, but the salt & vinegar potato chips served on the side were even better. Instead of a kettle chip crunch, they were melt-in-your-mouth, which worked really well with the light crunch of the toasted bun and the snap of the hot dog casing.

Poutine: I haven't met a poutine I didn't like, and this one was no exception. The best part about it? It tasted like Hamburger Helper (a very very good thing). Had I not been sharing it, I would have ditched the fork and scooped it into my face by the handful.

If you're still reading, here's a picture of Steve Wildy, the beverage director for the Vetri Family, and current contender for nicest guy in America. If you want to geek out on booze, this guy is a wealth of knowledge, and he's happy to share without being a dick and/or making you feel like an idiot (yes, another tangent).

I'd recommend going for happy hour immediately, and if you don't have to drive, you might as well just stay there until the late night happy hour kicks in at 10 P.M. Buen provecho.
Posted by Fidel Gastro at 12:47 PM