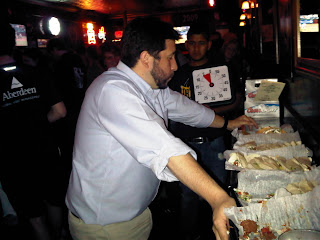 I have wanted to do the Drinker's Pub taco challenge for some time now, but much like going on a diet, at what point do you decide that it's a good idea to do so?  The answer, as expected, is after a few half-priced beers and an unsuccessful quest for a pickleback shot* in Center City.  Thinking that a place like Drinker's would definitely have them, my brother-in-law and I stumbled into their Chestnut Street outpost just as happy hour was ending.  This was supposed to be a brief final stop before catching the regional rail back to Philly's outskirts, but the disappointment of having to do a SoCo and lime shot instead of a pickleback coupled with the giant pitcher of beer that was waiting for me upon my return from the bathroom fueled my competitive spirit stupidity and convinced me that I could eat 33 tacos in 13 minutes.  I love me some tacos, but this was sheer torture, and I'm a little pissed about the fact that I may have been had.  In my drunken stupor, I went with the recommendation to do soft bean tacos in lieu of crunchy chicken tacos.  The latter would have gone down much easier, but the waitress pushed for me to do soft bean, knowing that 13 minutes is barely enough time for a large mammal to take down 33 tacos, let alone my fat ass.  Not surprisingly, amid the cheers and jeers of a packed house and a diminutive Mexican holding up a timer, I barely made it through half of the tacos when the 13th minute ticked by.  Had I been allowed to eat the tacos as I ordered them, I think the story would have had a much happier ending.  Instead, I left Drinker's with my head down, picturing the tacos that remained singing a taunting yet melodic rendition of Busta Rhymes' "Light Ya Ass on Fire."  You won this round, Drinker's Pub, but I shall return.  Buen provecho.

Piss poor video footage of my piss poor decision-making can be seen here (turn up the speakers) and here.

*For the uninitiated, the pickleback (or is it pickelback?) involves a shot of whiskey chased by a shot of pickle juice.  Trust me, it's delicious.
Posted by Fidel Gastro at 3:28 PM

Email ThisBlogThis!Share to TwitterShare to FacebookShare to Pinterest
Labels: artery tartar, Beans, deception, extreme sports, gluttony, tacos, Why Did I Eat This