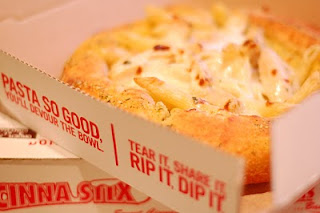 The Bread Bowl Pasta from Domino's had fallen so far down the to-do list that I almost forgot about it (that's a lie). While I didn't think about it every day, I was nervous that it would be taken off the menu before I could subject myself to such torture.  Unwilling to drive the 20 minutes to pick it up (the slogan's "Get the Door. It's Domino's," not "Get in the Car. It's Domino's."), I was certain that the Bread Bowl Pasta would leave this world before passing my lips. 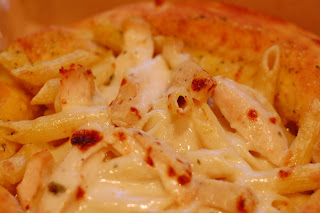 Fortunately, we found ourselves directly in front of a Domino's on our way home from rug shopping, and it was just late enough that cooking dinner would have been too hectic.  Some curse timing; I champion its crucial role in the instant gratification of rationalization. It's one of the soupiest, hottest, hurts-to-breathe days of the year, and I'm eating penne alfredo out of a bread bowl.  What the hell is wrong with me?  To save yourself the calories (which you should), here's a list of why you shouldn't follow suit:

1. It's not that it tastes bad. It tastes bad for you.  I'm usually fine with this, but when every bite is followed by a stabbing pain in your chest, it takes the fun out of eating.
2. It's summer.
3. Their new crust--which shows up here in bread bowl form--is taken straight from the Pizza Hut playbook: saturated in grease.
4. It's the middle of summer.
5. The pasta was overcooked to the point of being gummy. I expected overcooked, but they went way overboard.

We all know that I'm stupid enough to try this again, but I'll probably (hopefully) wait until it's not 90 degrees out.  I don't recommend it, but it you must, please wait until winter to eat this.  Buen provecho.
Posted by Fidel Gastro at 11:56 PM