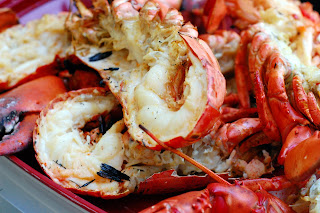 Betting that the blowout sale was primarily a function of the Memorial Day mass exodus and not because they were poisonous, I scooped up three lobsters at $5.99 per pound and upped the fancy ante for Mrs. Gastro and the Gastro-in-laws this past weekend.  It was my first time grilling lobsters, which is somewhat labor intensive, and consequently requires more sobriety than usual at 4pm on a holiday Sunday.  I overcooked the claws (might be a good idea to snap them off before grilling), but the butter-basted tails were resplendent. The crowd agreed that it felt like being down the shore, even though we were nowhere near it.*  Four days later, there have been no complaints about getting sick, so the bet paid off, and I can now add grilled lobsters to my wheelhouse, although I'll probably wait until the next lobster fire sale to do it again. Buen provecho.

Grilled Lobster, adapted (mostly stolen) from Kim Knox Beckius
How ever many lobsters you want to cook (I made three 1-1 1/4# chickens)
3 tbsp butter
Juice of 1 lemon
1 tsp lemon zest
Granulated garlic, salt, and pepper to taste

Bring a stockpot full of salted water to boil. Drop the lobsters in, two at a time, and boil for 5-7 minutes. Remove from water and let cool.  Meanwhile, melt butter and combine with lemon juice, zest, and granulated garlic, salt, and pepper. When lobsters are no longer too hot to handle (nor too cold to hold), use a chef's knife to split the lobsters in half. The easiest way to do so is to stab between the eyes and then rotate the knife down and into the rest of the body. Rinse out the tomalley, pat the halves dry, and baste the tails with the lemon-garlic butter. Place the prepared halves on a heated grill, shell-side down, for another 8-10 minutes, or until meat is white and opaque. Serve with the rest of the lemon-garlic butter, grilled corn on the cob, and whatever else you fancy. We had potato salad and some ridiculous skillet macaroni and cheese. Save the shells to make stock, use the stock to make risotto, extend the fancy bender.

*Conversation may not have occurred
Posted by Fidel Gastro at 7:30 PM