Why Did I Eat This? Burger King's Mac 'n' Cheetos


I live an inevitable food truth: If it's 50% Cheetos and 50% macaroni and cheese, there's a 100% chance I'll eat it. Enter Burger King's Mac n' Cheetos, my self-fulfilling prophecy of sadness and sodium.

First came the sponsored post. Then, a straightforward #MACnCHEETOS hashtag. Finally, I'm making actual phone calls to BK locations in and around Philadelphia* to find out whether any of them are holding. Marketing really does work (at least on my own feeble mind).

And so there I was on a Friday evening, racing toward the local Burger King with my son in tow, who also happened to be stoked to eat a few neon orange mozzarella sticks (this makes me proud beyond belief). Rather than go full meal, we ordered nothing but the Mac n' Cheetos, lest we pollute our palates with flame broil. 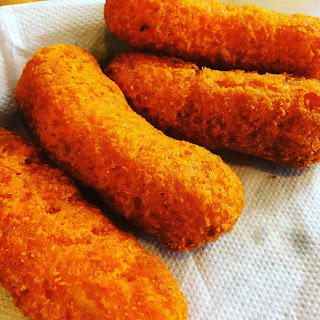 $2.49 plus tax gets you five warm cheese puffs fresh out of the microwave. While we waited for them to cool, we scrolled through Snapchat geofilters until we got to the site/product specific "YASS CHEEEESE!"overlay (the marketing onslaught is worse than that time in Game of Thrones when all the dudes from Ramsay Bolton's army surrounded Jon Snow's army and then did that badass thing where they slowly closed their circle of spears whilst hiding behind shields), then we dug in.

The outer shell, according to the BK product website, is covered with crispy Cheetos flavor. I didn't realize you could "cover" something with flavor, but I am neither a scientist nor a copywriter. Regardless of how it's accomplished, the consumer is rewarded with not having to deal with the dreaded Cheetofinger**. The innards were nice and creamy (like that one weird bite of a fried soft shell crab but without the briney poop taste), and the overall experience was a success in that I wanted to eat at least three or four orders. Seriously, if these were passed h'ors doeuvres (and they probably should be), I'd stand by the kitchen door and obliterate the tray before they made their way out to the crowd. I'm probably in the minority by saying this, but they might even have a slight edge over Taco Bell's Doritos Locos Taco.

And in case you're wondering, the answer is yes, I ordered a Whopper meal following the taste test. Please feel free to judge me. Buen provecho.


*I actually only made one phone call.
*An all-time favorite "Would You Rather?" of mine is, "Permanent Cheetos residue on your fingers? Or always (even in blistering July heat) having to wear a black suede jacket with fringe?".
Posted by Fidel Gastro at 1:50 PM