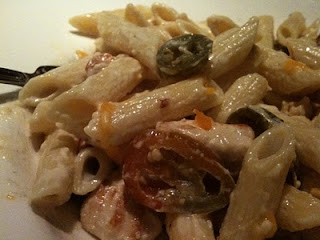 There are few places more depressing than family night at Uno Pizzeria (especially when you're one of six diners), but your options are severely limited when your plan to "just go and get the BJ's membership" turns into "Maybe we do need a gallon of mayonnaise," and "Sure, we'll definitely finish this suitcase of mixed greens before it wilts," until you've clocked a few laps around the discount warehouse, you're hungry, and more importantly, the baby is hungry.  Under these circumstances, the best choice is always the closest establishment that serves beer and more than likely just reheats their pre-packaged entrees, thereby ensuring prompt service.  Uno was a no-brainer.

Not wanting pizza and feeling perpetually guilty about eating red meat (I'm almost at the point where I feel guilty eating meat in general, which is a real turnaround for me.  It's also a huge bummer), I opted for "Rattlesnake Pasta," penne and grilled chicken in a cream sauce topped with shredded cheddar cheese and pickled jalapenos.  I rationalize ordering the unhealthiest thing on the menu based on both price and the fact that eating such crap only happens once in a while, even if once in a while sometimes means twice a week. This dish was definitely in that category.

After a well executed magic trick by a ponytailed magician (and a subsequent awkward moment deciding whether or not I had to tip him and then not tipping him*), the pasta arrived in all its gooey glory.  Except that, as you can see, the combination of cold weather and air conditioning caused the sauce to congeal.  Coupled with a stingy sprinkling of cheddar and jalapenos, I was left with forkful after forkful of bland penne.  Each bit made me more depressed, which made me eat more, which made me more depressed (just like poor Fat Bastard).  Our waiter, a rotund and clearly stoned version of Luke Wilson (who looks a bit hefty himself in the AT&T commercials), said it was his favorite.  In retrospect, it probably wasn't the best idea to take a recommendation from Johnny Blaze, but you live and learn, which is really the essence of Why Did I Eat This?  Buen provecho.

*Steve G, if you're reading this, what's the protocol?
Posted by Fidel Gastro at 4:48 PM

Email ThisBlogThis!Share to TwitterShare to FacebookShare to Pinterest
Labels: artery tartar, chain restaurants, pasta, pizza, Why Did I Eat This, writer's block