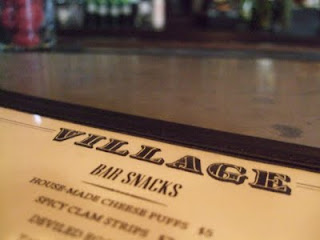 If we're being honest here, I recall that nostalgia for the good old days was reserved for the kids who sucked at sports (the same ones who sucked at drama but insisted they were good, or at least could pull it off at a high school level). The 20s, 30s, 40s, and 50s were the test scores the cool kids got, not decades of bygone eras begging someone to say, "Those were the days." In recent times, however, it has become increasingly more badass to sidle up to the bar in your bespoke suit and order a cocktail that nobody's heard of since before your dad stopped drinking. Score one for the drama geeks for being way ahead of their time (and for continuing to ballroom dance at any cost), and score one for Jose Garces for capitalizing on old timey chic with Village Whiskey, a time warp of an establishment that makes you want to smoke a pack a day (indoors). 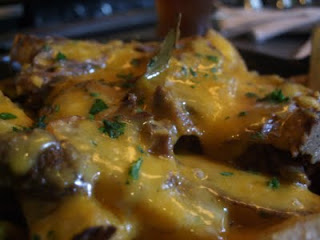 More important than the ambience, though, is the food. There's been a fair amount of dialogue regarding the Whiskey King, a culinary triple-dog dare of a burger piled high with the richest toppings imaginable. The right thing to do would be to accept the challenge, but it's best to leave it to the experts. Besides, I've had one thing and one thing only on my mind since Meal Ticket posted pictures earlier this month: short rib and cheddar french fries. So today (actually today), I braved the wind and the rain (could this also be considered 'going postal'?), sidled up to the bar (in khakis), and tucked into this most comfortable of comfort foods. 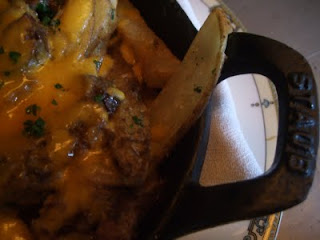 Not only was the cast iron skillet of potatoes blanketed in sharp cheddar and tender beef, but there was a shallow bath of cheese sauce beneath! The potatoes themselves had a hint of cinnamon, making them taste like picking apples on a crisp Autumn afternoon (that's a good thing). You know the commercial where the snowman comes in from the cold, eats the soup, and transforms into a little kid? Eating cheddar and short rib fries is like that, but a million times better. There was also the added bonus of Sixpoint Righteous Rye on tap (the best I could do given the fact I had to go back to the office. As a side note, there's a wall of whiskey that would be worth the alcohol poisoning and/or job loss). Eventually, I'll get to the burger, but probably not before having another ten or twenty plates of these fries. I strongly recommend braving the crowds (lunch is probably better than dinner) just for these, but among the cocktails, booze selection, and food, there is certainly no shortage of great things to try. Buen provecho.

Village Whiskey is on 20th and Sansom, right next to Tinto. I got nicely sated for $24 including tip.
Posted by Fidel Gastro at 2:56 PM