Behold the first (and probably last) installment of "Cooking in Bike Shorts." This episode features a very well filmed (thanks, Mrs. Gastro) but horribly produced (way to drop the ball, self) segment of me making the Homesick Texan's carnitas recipe. Since I do a shit job of explaining what it is that I'm making, I've included the recipe below. 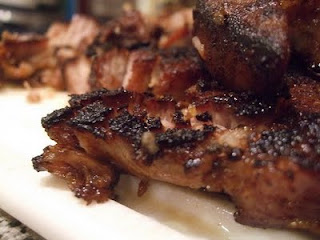 Carnitas is one of my favorite ways to prepare pork, and I love the simplicity of these tacos: a warm corn tortilla is the vehicle for a handful of carnitas, onions, a squeeze of lime, cilantro, and salsa (if you like). I could eat fifty in one sitting. I used to get them at a place called Panaderia La Diana in Salt Lake City for a buck each. It was a tortilla bakery with a small kitchen tucked into a corner of the building, the stuff of legend. I couldn't exactly replicate the flavors, but I think I came pretty damn close. Buen provecho. 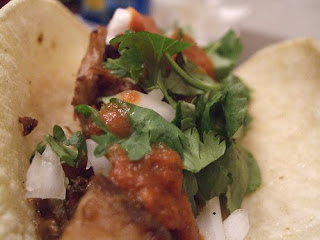 Method:
1. Cut pork into strips (three inches by one inch), add to a large pot with the liquids and salt. Bring to a boil and then simmer uncovered on low for 2 hours. Do not touch the meat.
2. After two hours, turn heat up to medium high, and continue to cook until all the liquid has evaporated and the pork fat has rendered (about 45 minutes). Stir a few times, to keep pork from sticking to bottom of pan.
3. When pork has browned on both sides, it’s ready (there will be liquid fat in the pan). Serve either cubed or shredded (pork will be tender enough that just touching it will cause it to fall apart).Goes very well with a green salsas such as Ninfa's green sauce or this tomatillo salsa or this salsa verde with avocados and tomatillos.