Why Did I Eat This? Taco Bell's Cap'n Crunch Delights 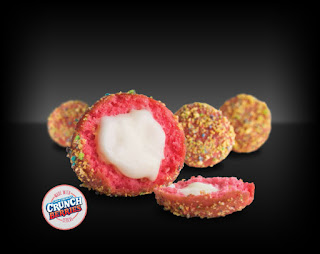 If I had a dollar for every dollar I've spent on poor food choices, I might be able to afford the mountain of inevitable medical bills that will result from a life spent eating garbage. My latest questionable digestible? A 2-pack of Taco Bell's Cap'n Crunch Delights, an impulse buy I paired with a Grilled Stuft Nacho that was an impulse buy itself.

Under different circumstances, I may have enjoyed both, but almost missing a train and then having to eat them hunched over a greasy bag while sandwiched between fellow commuters made the experience one I'd like to erase from memory. For starters, the Grilled Stuft Nacho is an inane concept. Whereas the Crunchwrap Supreme maintains its structural integrity, the GSN has no tortilla chip skeleton, only bits and pieces of chips floating in a cumbersome blob of "cheese" sauce and sour cream barely held together by a tortilla triangle. It's impossible to eat on the go without making a mess.

Let's not get off topic, however. We're here to discuss the "delights," a misnomer if there ever was one. They're made to order, which would normally be a good thing, but my local Taco Bell (located at the stabbier end of Suburban Station) doesn't keep their grease hot enough to properly fry them. What I bit into had the texture of gulab jamun. In college, I spent a lot of time on the Indian food buffet circuit, and learned to loathe gulab jamun. Furthermore, any sweetness was overpowered by unmistakably rancid vegetable oil.

Perhaps if cooked at the right temperature and with time enough to eat like a gentleman, my opinion might change, but I'm certainly not willing to make the same mistake twice. If anyone disagrees, I'd love to hear your counterpoint. Buen provecho.
Posted by Fidel Gastro at 11:38 AM

Email ThisBlogThis!Share to TwitterShare to FacebookShare to Pinterest
Labels: artery tartar, cheap eats, Taco Bell, Why Did I Eat This, writer's block