Why Did He Eat This?

Been way too long, folks. Way too long. Seeing how the laziness doesn't subside with old age (duh), and taking into consideration the fact that Philadelphia wasn't one of the chosen few test markets for the Taco Bell Breakfast (even though we are a lovely amalgam of actual fat people (me) and skinny fat people), I enlisted the help of a good friend in Nebraska, who was gracious enough to snap a few pics and offer his take on what is sure to be a disappointment once it lands in our fair city. Behold, the taste test results of Taco Bell's attempt at breakfast.

Words and pics courtesy of Matt Biggins, to whom we owe a debt for the intestinal discomfort:

I'm fine with the admission that I do enjoy Taco Bell. Of course, late at night, it's a no-brainer. But even daytime, 3 or 4 crunchy tacos are great. Like a couple cheeseburgers at McDonalds, even the fast food giants can do the simple stuff well.

A few weeks ago, I made a run for the border. The marquee out front read "Breakfast Coming in August." Having seen nothing on TV or anywhere else, I was a bit surprised. Come to find out that Omaha is a test market. OK. Taco Bell and breakfast. Anything's possible, right? For the uninitiated, there are 3 main offerings being tested:

I ordered one of each. The Taco looks like it has a big 'ol slab of sausage, so, anticipating the digestive activity of the next several hours, opted for the slightly lighter bacon on my Griller and Crunchwrap. 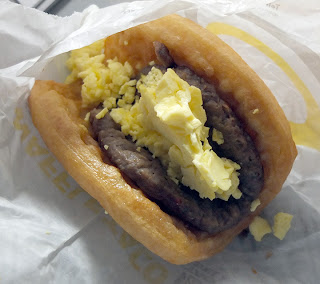 First off, the Taco. This is the one I'm most excited about. I love waffles. Love 'em. And with sausage, giddy'up. The waffle is thick and tender, but oily. First bite, oil. Slightly stale oil. Not a promising start. The next couple bites improve, as the sausage flavor takes over. I was expecting some sort of maple crystals in the waffle, like a McDonalds McGrillers. That or some kind of maple-y sauce. But there is none. Pretty disappointing. 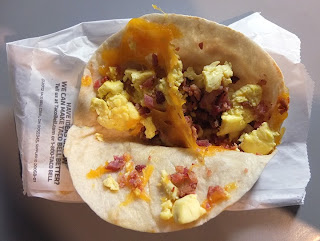 Next up, the A.M. Griller. It's like a soft taco, filled with breakfast. The bacon flavor reminds me of imitation bacon bits. Not a bad thing, but not great. With a bunch of hot sauce, this one is totally decent. 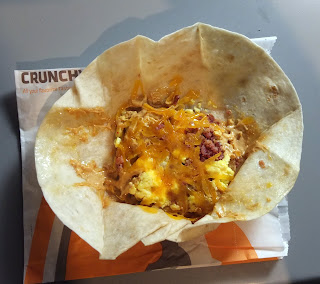 Finally, the Crunchwrap. A hash brown(!) replaces the tostada shell. There's also a slightly spicy sauce that tastes like their quesadilla sauce. It's a lot smaller than the normal Crunchwrap, so there's more tortilla per bite. And the potato adds some heft to this. Pretty heavy for a breakfast, but tasty. Again, the bacon flavor tastes artificial. I'm sure sausage wrap is better.

Having eaten halfway through each item, my stomach is not pleased. This is certainly one of the greasier breakfast meals I've had. While I can get down and enjoy a greasy pile o' fast-food, morning is a rough time to do so. Perhaps to nurse a hangover, a Breakfast Crunchwrap and a big-ass Mountain Dew may hit the spot, but I'd rather spend the junk food points on a big plate of biscuits and gravy.

Email ThisBlogThis!Share to TwitterShare to FacebookShare to Pinterest
Labels: artery tartar, breakfast, Nebraska, Taco Bell, Why Did I Eat This