After 45 Courses, a Winner is Crowned, or, I Had Dinner with Questlove Last Night 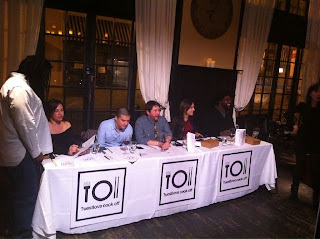 Last night, I had the distinguished honor of judging my first cookoff.  While I fully expected my first judges' panel to be for something more along the lines of a Rotary Club Chili Cookoff, this one was certainly more A-list, and I found myself seated among Philly food folks Drew Lazor and Audrey Claire Taichman, as well as Sasha Grey and the host, Ahmir "?uestlove" Thompson.  Inwardly, I thought to myself, "How the fuck did I wind up here?"  Outwardly, I donned my Hill-side tie and (hopefully) held my own with my winning smile and freshly trimmed beard. 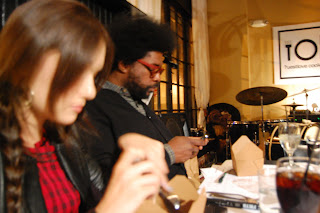 The event was intimate, probably no more than 50 people, creating an excellent opportunity to network and/or make jackass comments to Mr. Thompson like, "With a name like Jazzy Jeff, he should probably be on time." (Turns out Jazzy had babysitter issues)  Being on the panel, I got to taste and judge five courses from nine different chefs, including Scott Schroeder from SPTR and Kenny Bush from Bistrot la Minette (Kenny came in first, winning the opportunity to cook backstage at The Roots Picnic).  I haven't eaten that much since the Pastrami Challenge, and while certainly fun, such caloric excess is challenging to say the least. 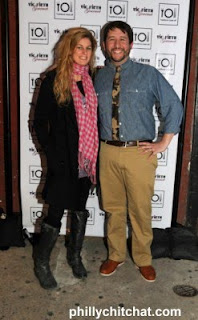 As an added bonus, I got to meet Top Cheftestant and 10 Arts Chef de Cuisine Jen Carroll, who will be cooking with steely blue-eyed Eric Ripert later this month.  Hopefully this won't be my last judges' panel, but if it is, I can at least check both "Meet ?uestlove" and "Eat fried PB&J" off the bucket list.  Buen provecho.